Home Travel Across Kerala on a country boat
Travel

Across Kerala on a country boat 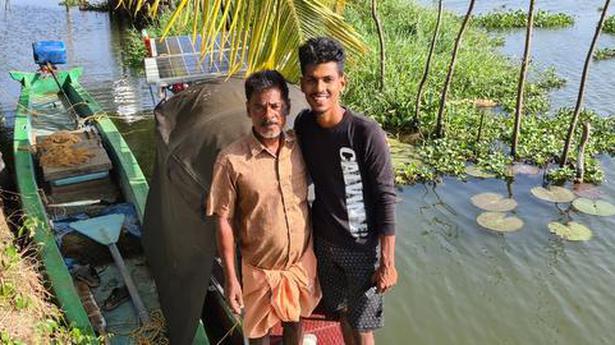 Abhijith and his father Bharathan from Thrissur, are on a journey through the lesser-explored waterways of the state on their boat

Abhijith Bharath is on his dream journey. On January 28, he set off to explore Kerala on a country boat with his father Bharathan AA; a slow, meandering journey through the picturesque yet lesser-explored canals and backwaters.

“We don’t have GPS. We are going to rely on our instincts and just take things as they come. We don’t even have a well-defined route map,” adds Abhijith. The idea is to understand life along Kerala’s waterscape, interact with people and soak in the experience of living on a boat.

The duo started their journey from Poyya, Thrissur, and has reached Kollam in seven days. “We plan to go up to Thiruvananthapuram and then back to Thrissur, before starting towards the northern region of the State covering Malappuram up to Kasaragod,” says Abhijith.

Twenty-five-year-old Abhijith is an album designer and his father, a fisherman. Having grown up beside the backwater in Ezhikkara, Paravur, Abhijith has always been fascinated by boats. Through his growing up years, he has attended vallamkalis (boat races) just to savour the heady excitement of seeing so many boats in action.

However, it was recently that Abhijith felt a compelling desire to see Kerala on a boat. “And I wanted my father to accompany me,” he says. He discussed the idea with Bharathan, who agreed wholeheartedly.

Funds, however, were a problem. The journey would require a boat in good condition, which the duo initially thought of borrowing. “But when it did not work out, we decided to get a new boat,” says Abhijith. Bharathan pledged his house in Poyya and bought a boat.

Once the boat came in, Abhijith got to work, modifying it for the journey. He fitted a small motor first. The traditional fishing boat soon got a total makeover with a kitchen, a toilet, a desktop, dismantlable tents to sleep in and storage space, complete with a solar panel.

The boat is 10 kol (about 24 feet) in length and one-and-a-half kol (about 4 feet) in breadth. Ahibjith decided to get his computer on board so that he could get some work done as well.

The entire modification was done by members of Abhijith’s family. It took about three months and ₹1.5 lakhs to set it up. “Now, this boat can easily accommodate at least three people,” says Abhijith.

The kitchen consists of a stove, a sink, a small space to store provisions, an ice-box to store fish. Space has been provided for cooking gas and potable water too.

It has been designed in such a way that these amenities fit well into the belly of the boat. The cover, made of the material used as floorboards in buses, acts as the floor of the boat. “This is a self-contained unit. We have everything we need on board,” says Abhijith. The boat has a sink, a sewage collection compartment and waste bins, too, so that the water body is not polluted, he adds.

They buy supplies from the closest village as and when they need it.

Abhijith is also a vlogger, and is documenting the journey on his YouTube channel ‘Travel with Abhijith’. Along their way, people have come up to see them, click selfies and some have even offered to host them in their homes.

Bharathan and Abhijith sail through the day and rest during the nights. “My father, who has been a fisherman all his life, knows the water and its many ways. He knows when the tide or the wind changes,” says Abhijith. “However, it is still an adventure. When the wind is strong, or the tide is high, we don’t sail. We wait for it to pass,” he adds. They have life jackets for safety.

Bharathan would be steering the boat for the most part, with occasional help from Abhijith. For directions, they depend on villagers and fisherfolk whom they meet on their route. They aim to visit all the villages that can be accessed by water.

The entire journey would take about a month and more. “It is not like travelling on the road. Few people have undertaken a feat such as this. We have no clue how this would turn out. But that is the fun of it. We are taking each day as it comes,” says Abhijith.