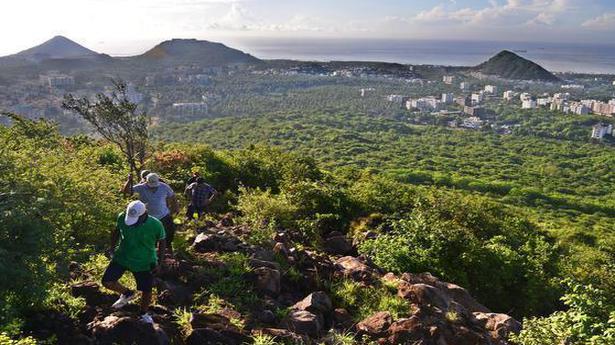 As tourism activities begin, trekking and adventure tour groups in Visakhapatnam are all set to take people to the unexplored beaches and hills but with a hint of caution

History narrator Jayashree Hatangadi has been living in Visakhapatnam for several decades. An avid traveller, there are barely any areas in and around the city that she hasn’t visited. However, recently, when Wilded a city-based adventure tourism group announced a day-long trip to the unexplored areas of Paderu, she was one of the first ones to jump on the bandwagon.

“Every trip to Paderu or Araku is like a new experience because I keep discovering so many things. During my first trek after the pandemic with Wilded, I learnt more about the local butterfly varieties and the types of plants that grow in the agency areas. With proper precautions like wearing masks, sanitising hands and keeping proper distance, these trips seem safe as they are away from the crowded tourist places,” she says.

Experimenting with the new normal, adventure tourism groups in the city are getting back in action after the government allowed tourism activities across the State. The groups that are a huge hit among the Nature lovers in the city were not functioning due to the pandemic since February. But now with a focus on less-touristy destinations, wide-open spaces and outings in small groups , these travel groups are taking people to away from the city’s hustle to quaint tribal hamlets in Araku and Paderu.

Wilded, which works in collaboration with Eastern Ghats Wildlife Society, was one of the first groups in the city to announce a single day trip to Madugula and Paderu after tourist spots were reopened. The trip was structured to sensitise people about snakes and introduce them to local floura and fauna. They also took people to a tribal settlement were the participants were served native food made of bamboo shoots and pumpkin leaves.

“Earlier we would take groups with 25 to 30 people in one go, but keeping in mind the current need for social distancing we have reduced the group size to 12 per outing. We are also asking the participants to come in their own cars to reduce the interactions. While enrolling people for the treks we enquire about their health conditions and do not allow children and elderly people,” says Vimal Raj from Wilded.

Trekkers at a secluded waterfall

City-based Treksome run by Samved Negi and Vivek Ravi Kiran are all set to host their first outing since February this year. “The peak time for these treks starts from July when the summer resides. We have already lost two months this year. However, our priority now has changed from giving a novel experience to arranging for a safer one. For this we have formulated a questionnaire for people willing to join us. We will check their medical history and the areas they are coming from to ensure minimum risk. We also ask if someone is undergoing a quarantine period. During the treks our volunteers will be watching out for social distancing during the treks,” says Samved, co-founder of the group.

In the upcoming days the group is planning for treks in Madhavadhara, Bhimakonda and certain parts of Anantagiri forests.