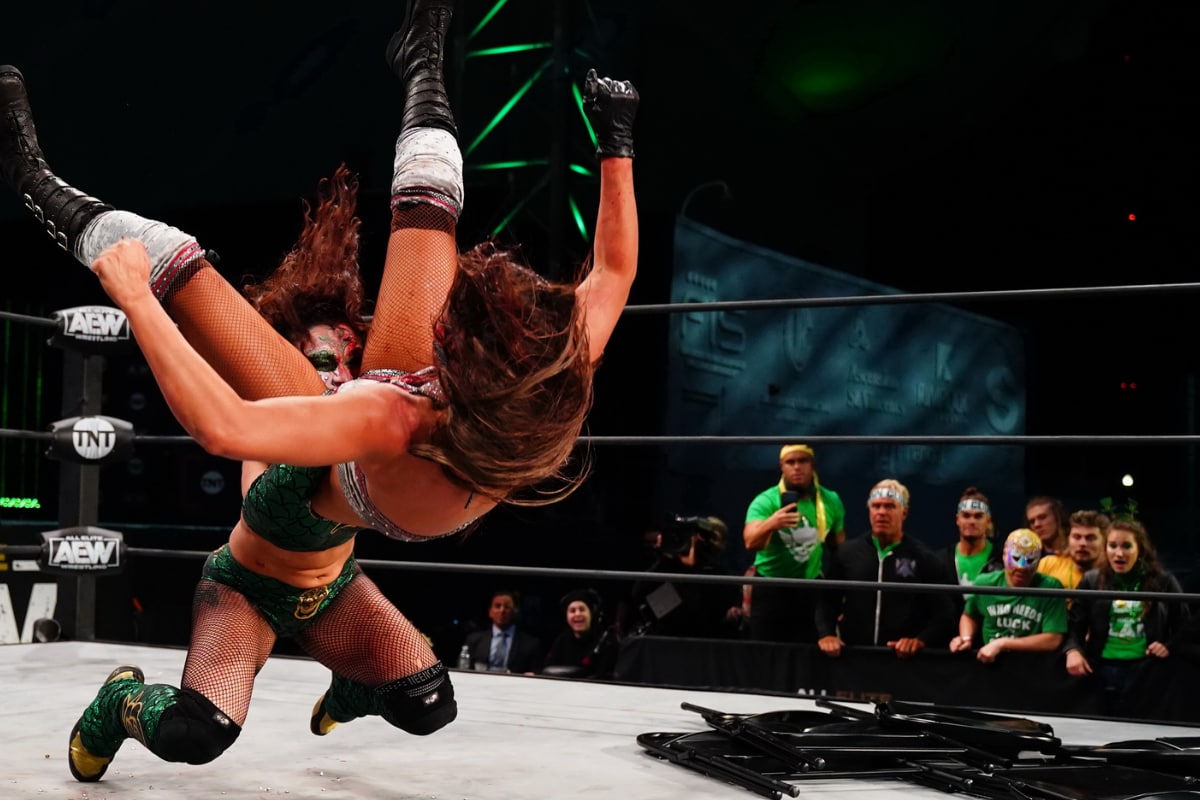 St. Patrick’s Day Slam episode of All Elite Wrestling on Wednesday featured another appearance by Christian Cage. The show was also headlined by an Unsanctioned Lights Out match between DrBritt Baker D.M.D and Thunder Rosa, while, the first women’s main event also featured Cody Rhodes’ take on Penta El Zero Miedo among others.

Here are the major matches/segments that happened this week:

In the opening match of this St. Patrick’s Day Slam, Cody Rhodes squared off with Penta El Zero Miedo. The duo fought to the arena floor early, especially Rhodes, who continued to show no regard for his injured shoulder. Miedo had the upper hand as he spent several minutes working over Rhodes, that included a backstabber that gave him a two-count. Rhodes managed a comeback of sorts but was slower due to his shoulder injury. He delivered a tope suicida before adding several moves, but it was not enough to put his opponent away. At the climax of the match, Meido fought out and snapped the arm of his opponent, which allowed Rhodes to catch him with a sunset flip for the win.

Jade Cargill in her maiden AEW singles debut this week showed her strengths battling Dani Jodyn. She caught Cargill with a back elbow early on and the latter responded by dropping a pump kick and followed it with a release German suplex. She enjoyed the upper hand since then to finish off the match quickly after hitting her Jaded manoeuvre to earn the pinfall win.

The AEW Dynamite for the first time was headlined by two women. The bout featured rivalry between Thunder Rosa and Dr. Britt Baker DMD as they battled in an unofficial match. Rebel attacked Rosa before the opening bell, giving Baker enough time to attack the latter.Rosa recovered soon enough by throwing chairs at Baker’s face before sending her over the guardrail.

After the break, Rosa attacked her opponent with a ladder which led her to bleed from the face. Despite the criticality of both women superstars, they kept going at each other as they put up one of the greatest matches in AEW history. In the end, Rosa was able to break free from Baker’s Lock Jaw, as the action moved out of the ring, where she put her heel through a table with a Fire Thunder to achieve the victory.

Rey Fenix had the upper hand in the opening exchange, taking Angelico down with an arm drag. He followed it up with a couple of chops before trying to pin Angelico, whoavoided Fenix’s other moves and stopped him in his tracks. He went for his back, hammering him with right hands. Fenix managed to reach the ropes and came back with a rana from the middle rope, taking Angelico down, and then hit a Tombstone to finish him off.

The Matt Hardy Empire team consisting of Private Party, The Butcher and The Blade against Jurassic Express’ Luchasaurus, Jungle Boy and Marko Stunt and Bear Country. A hot start gave way to grounding and working over Jungle Boy before heading through the commercial break. Luchasaurus pummeled Private Party. He downed Isiah Kassidy to score a near-fall, but The Butcher broke up the pin and eventually laying Luchasaurus out. In the end Hardy, demanded the tag and delivered the Twist of Fate for the win.

Winner: Matt Hardy, Private Party, The Butcher and The Blade

MJF, Tully Blanchard, FTR, Shawn Spears and Wardlow made their way to the ring one week after finishing off The Inner Circle to close out the show. Tully Blanchard cut a promo and said WWE Raw is doing a much better tribute to the Four Horsemen with The Hurt Business. MJF then paid tribute to every member of his team before talking about himself. He said that he’s just 24 and had at least another twenty five years left to be the GOAT. The Pinnacle have arrived in AEW and they’re ready to take over.

Just after the 10-Man Tag Team match, Christian Cage was interview by an AEW host where he hailed himself as a ’workhorse’. He went on to boast that he makes ‘wrestlers level up, and the former WWE champion went on to advise other superstars to relax as he’s not trying to take their place. He mentioned that his only goal is to the AWE Heavyweight Championship from Kenny Omega, whom he fought last week.