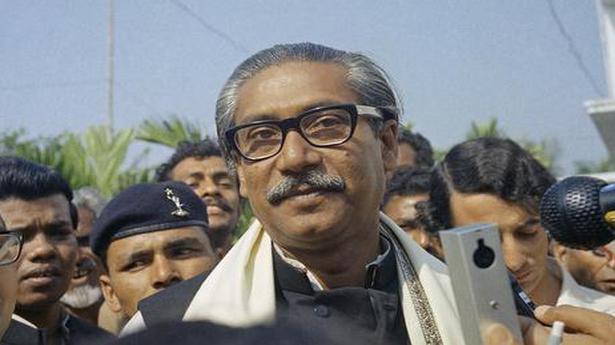 ‘It will be my honour to visit Bangladesh later this month’, tweeted the Prime Minister on the birth anniversary of Bangladesh’s founding father

Prime Minister Narendra Modi paid homage to Bangladesh founder ‘Bangabandhu’ Sheikh Mujibur Rahman on his birth anniversary on Wednesday and said he is a hero for all Indians.

Sheikh Mujibur Rahman, the founding father of Bangladesh, was born on March 17, 1920.

“My heartfelt homage to Bangabandhu Sheikh Mujibur Rahman, a champion of human rights and freedom, on his birth anniversary,” Mr. Modi tweeted.

“He is a hero for all Indians too. It will be my honour to visit Bangladesh later this month for the historic #MujibBorsho celebrations,” he said.

Prime Minister Modi will visit Bangladesh on March 26 and 27, his first visit to a foreign country since the outbreak of the coronavirus pandemic.

The Ministry of External Affairs (MEA) made an announcement on Tuesday on Modi’s visit to the neighbouring country following an invitation from Bangladeshi Prime Minister Sheikh Hasina.

“This visit is in connection with the commemoration of three epochal events — Mujib Borsho, the birth centenary of Sheikh Mujibur Rahman; 50 years of the establishment of diplomatic ties between India and Bangladesh; and 50 years of Bangladesh’s war of liberation,” it said.

Indian Red Cross Society State president A. Sridhar Reddy on Tuesday announced that IRCS would construct a cancer hospital in Srikakulam as many...
Read more