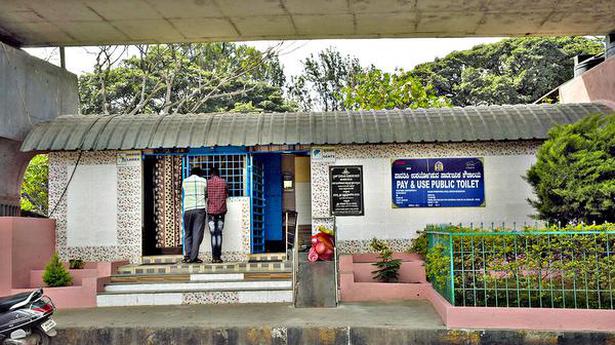 To address the problem of shortage of public toilets in the city, the Bruhat Bengaluru Mahanagara Palike (BBMP) is constructing new facilities in different locations. To begin with, 25 toilets will be constructed, while tenders for another 50 will be floated soon.

The city currently so far has 387 functioning public toilets, most of which are concentrated in the three core zones of East, West and South. Apart from these, there are around 170 e-toilets. However, most of these e-toilets are not in a working condition, BBMP officials have admitted.

As per the national guidelines set by the Swachh Bharat Mission for public toilets, there should be one toilet seat for every 100 men and two seats for every 100 women. Given the city’s population, estimated at over 12 million in 2017, there is a shortage of more than 1,000 public toilets.

Recently, Janaagraha sought inputs from citizens across the city as part of its annual ‘MyCityMyBudget’ campaign to put an end to public urination and make the city safe for pedestrians. Of the total 9,706 inputs received from citizens, 3,143 were about public urination, 916 about dirty or unusable public toilets and 591 were about locations where toilets were needed.

Srinivas Alavilli, head, civic participation at Janaagraha, said that based on citizens’ input, new toilets were needed in around 250 locations across the city.

An exercise had been taken up by the organisation to map the existing facilities and locations where they were needed.

“BBMP has made it clear that funding is not an issue. The actual concern is space; ground truthing will reveal if there is adequate space for new toilets in locations pointed out by citizens,” said Sapna Karim from Janaagraha.

BBMP’s Special Commissioner (Solid Waste Management) D. Randeep said the locations of the 25 new toilets were decided first based on need and easy access to water and sanitary connections, apart from ensuring there was no obstruction in public access to the facility. The new toilets have been designed to have good ventilation, usage of treated water and water saving features.

“They will be pre-fabricated structures, making construction easy and quick, and come with a clause of operations and management for a period of five years,” Mr. Randeep said.