Best from science journals: A robot without electronics 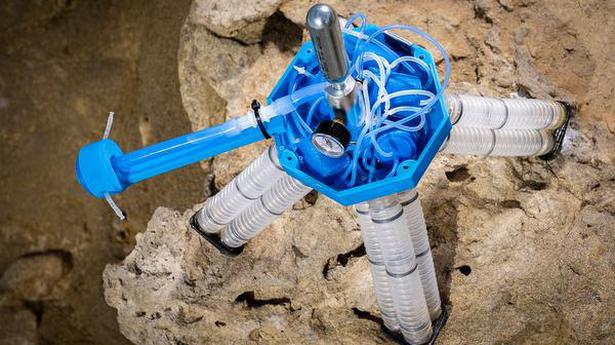 If you thought all robots need electronics to function, meet this cute four-legged soft robot that uses pressurised air to function. The authors write that these robots can find applications in places where electronics cannot function, such as MRI machines and mine shafts. The team is now working to improve the robot’s gait to help it walk on uneven surfaces and navigate over obstacles.

Cygnus X-1, one of the closest black holes to Earth discovered in 1964, has now been found to have a mass of over 20 times the mass of our Sun. Co-author Professor Ilya Mandel said in a release that the black hole is so massive it’s actually challenging how astronomers thought they formed. “The black hole in the Cygnus X-1 system began life as a star approximately 60 times the mass of the Sun and collapsed tens of thousands of years ago,” he said. Recent observations show the black hole in the Cygnus X-1 system is 21 times the mass of the Sun—a 50% increase on previous estimates. To form such a massive black hole, astronomers had to revise their estimates of how much mass stars lose via stellar winds. Credit: International Centre for Radio Astronomy Research.

Ice is a very versatile material, with about 18 crystalline forms known so far. The different arrangement of hydrogen and oxygen atoms, different pressure and temperature help in the formation of these different types of ice. Using a new cooling process and by increasing the pressure to around 20-kilo bar, researchers produced a new ice XIX and have now elucidated its crystal structure. The human gut houses over 142,000 species of bacteriophages (viruses that infect bacteria), notes a new study. “It’s important to remember that not all viruses are harmful, but represent an integral component of the gut ecosystem,” says co-author Dr. Alexandre Almeida in a release. “It’s fascinating to see how many unknown species live in our gut, and to try and unravel the link between them and human health.”

Using the gene-editing tool CRISPR, researchers have now found a way to increase the number of maize kernels per cob. “A lot of people were using CRISPR in a very simple sense just to disrupt genes completely, to knock out the gene. But we came up with this new idea to CRISPR the promoter regions that turn the gene on,” says Professor David Jackson in a release. The team hopes this new strategy will increase crop yield per acre and make agriculture more sustainable.