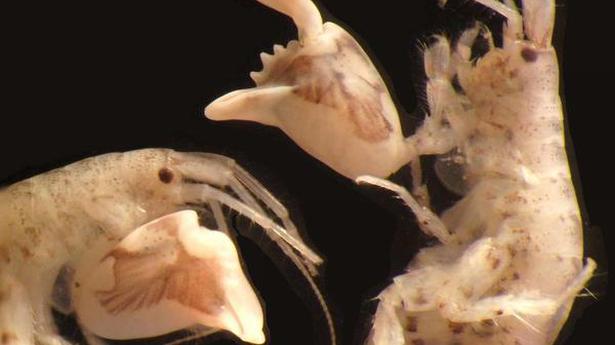 Snappers of the sea

The fastest snapping claws on Earth belong to male amphipods (Dulichiella cf. appendiculata) which are microscopic, shrimp-like creatures. Scientists noticed that they can repeatedly close their claws in less than 0.01% of a second. The claws make up a third of the male’s body weight and researchers say they are still trying to figure out why these creatures invest so much into this action and whether it plays into male-female interaction or territorial disputes.

The level of dangerous nitrogen oxides has reduced across the north equatorial part of Africa. But how was this possible when the region has seen an increase in human population and fossil fuel use? Researchers found that the reason was a decline in the longtime practice of setting dry-season fires to manage land. They noted that row-crop agriculture and shifting weather patterns also played a role.

Of limbs and lungs

About 370 million years ago, a certain fish species walked out of water, converted its fins to limbs and modified its lungs for air-breathing. A new paper has now shown that fish ancestors that lived millions of years before fish crawled ashore carried the genetic codes needed for limbs and air-breathing. “The water-to-land transition is a major milestone in our evolutionary history. The key to understanding how this transition happened is to reveal when and how the lungs and limbs evolved. We are now able to demonstrate that biological functions occurred much earlier before the first animals came ashore,” stated lead author Guojie Zhang in a release.

Published in Nature Ecology and Evolution

In 2015, a mass coral bleaching event occurred near the Kaneohe Bay in Hawaii. Four years later, the corals were studied, and new chemical signatures or biomarkers that helped some corals be more resistant to the bleaching, have been discovered. The researchers write that this finding can help conservationists restore and protect the global reef ecosystem.

What walking or running style did dinosaurs have? Is it similar to the visuals shown in Jurassic Park? By studying the joints and limb movements of modern birds and alligators, scientists have developed a new 3D imaging technology called X-ray Reconstruction of Moving Morphology — or XROMM that can help reconstruct the locomotion of extinct animals. The team writes that this technology “will help to unravel the history of vertebrate locomotor evolution.”