The Health Ministry has cautioned Maharashtra to plan for a “worst-case scenario” with sufficient lead time as the State continues to report the maximum number of new daily COVID-19 cases and deaths across India. It has also directed the resumption of death audits to support public health action and minimise mortality.

In a letter to the State earlier this week, Union Health Secretary Rajesh Bhushan said while the available health infrastructure was adequate, Maharashtra needed to look into vaccine hesitancy among front-line workers, “as their services would be required if the trajectory follows the upward swing as is being witnessed now. The State should also expedite vaccinating those with co-morbidities and elderlies.”

The health official’s letter comes a day after the State government announced a series of restrictions, mandating cinema halls, hotels, restaurants and offices (except those related to health and essential services) to function only at 50% capacity till March 31 while prohibiting all social, cultural and religious gatherings.

After its visit to the Maharashtra , the Central team has recommended that treating physicians should be re-sensitised on clinical management protocols and keep a close watch on any changes in clinical profile.

“Maharashtra is in the beginning of a second wave of COVID-19 pandemic. There is very limited active effort to track, test, isolate cases and quarantine contacts. There is no adherence to COVID appropriate behaviour among people both in rural and urban areas,’’ the team noted. 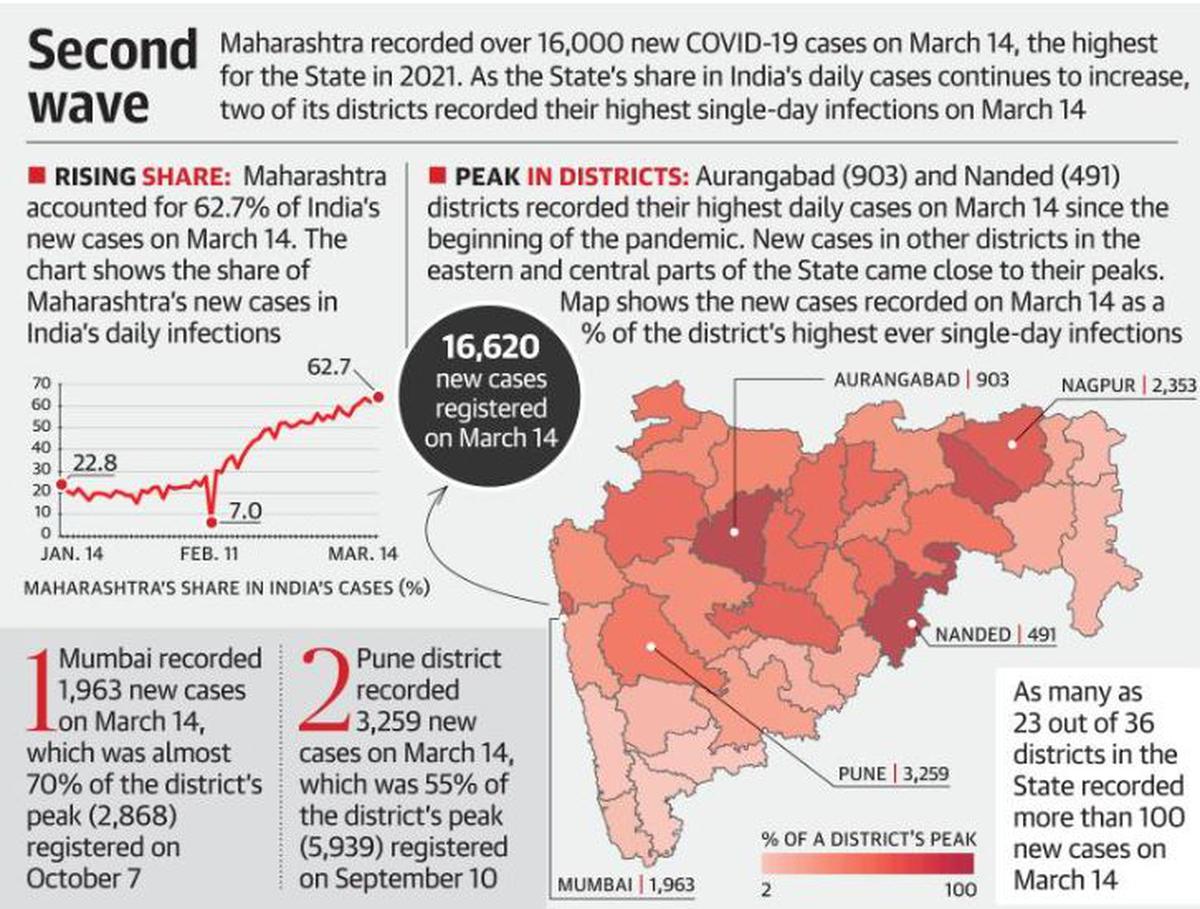 The report has been submitted after the Central team visited — Mumbai (S and T Wards), and districts of Thane, Nashik, Dhule, Jalgaon and Aurangabad from March 7-11. Previously the team had covered the Vidharbha region.

The Health Ministry has now recommended monitoring of the situation at the highest level, strengthened surveillance enhanced involvement of private practitioners, increased testing and reviewing the practice of isolating 80-85% of active cases kept at home.

It added that measures such as night curfews and weekend lockdowns had limited impact on containing/suppressing the transmission.

Responding to the communication, State Health Minister Rajesh Tope, denied that the Maharashtra government was “not serious” about tackling the renewed surge and said he had sought 2.20 crore vaccine doses from the Centre. Mr. Tope, who was in New Delhi on Tuesday, said he had written to the Union Health Minister, requesting the Centre to supply 20 lakh doses per week to the State.

(With inputs from Shoumojit Banerjee)