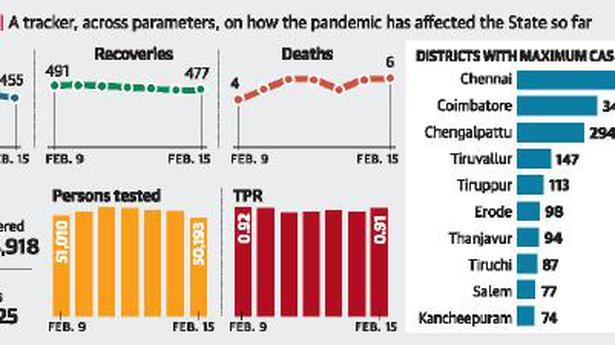 Perambalur and Tiruvannamalai districts reported no new case of COVID-19, and 22 districts recorded fewer than 10 infections each on Monday. There were 455 fresh cases and six deaths in the State.

A total of 143 persons tested positive for the infection in Chennai, followed by 46 in Coimbatore, 39 in Chengalpattu, 21 in Tiruvallur and 20 in Kancheepuram.

The State’s tally stood at 8,45,575, even as 477 more persons were discharged after treatment, taking the total figure to 8,28,918. Of the deceased, two persons each died in Chennai and Tiruchi. Coimbatore and Tiruvallur recorded one death each.