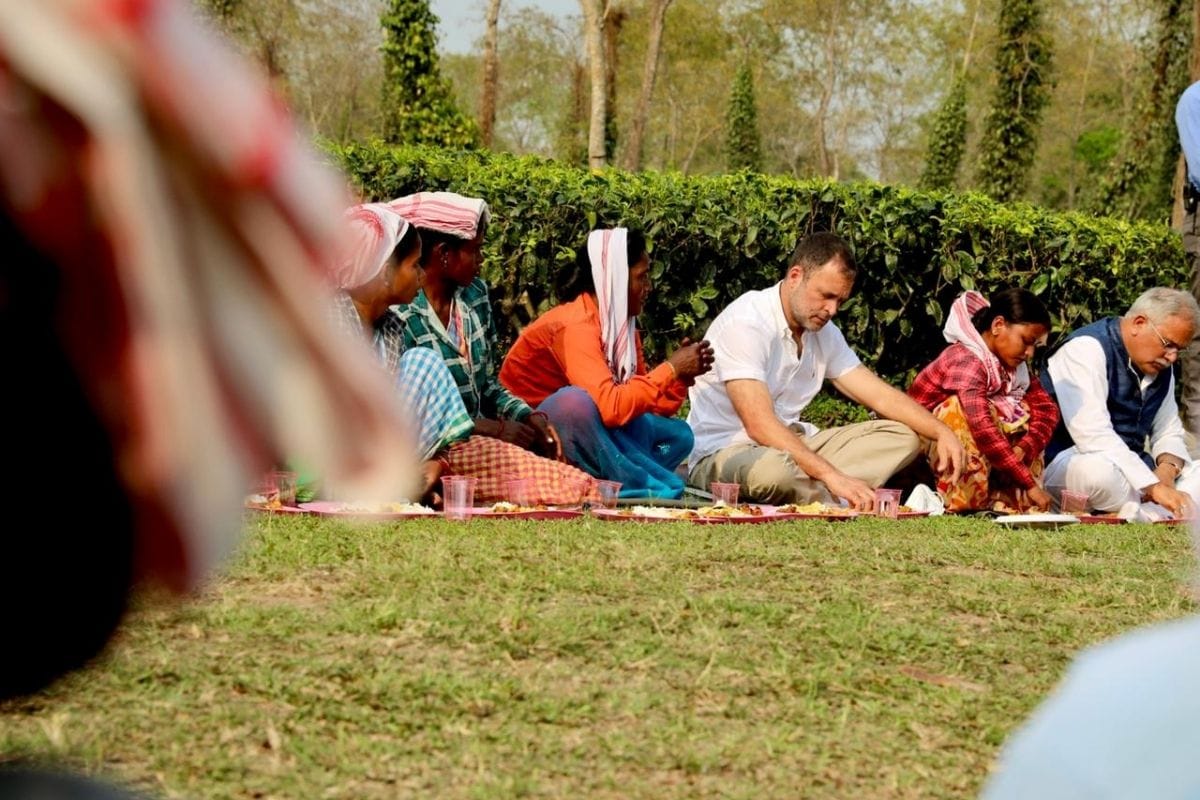 Congress leader Rahul Gandhi during his two-day visit to the poll-bound Assam, had his lunch with the tea garden workers of Dinjoy Tea Estate at Chabua in Upper Assam on Friday.

It was a mid-March luncheon in the middle of the lush green tea garden where the plucking for the “first flush” is ongoing. The lunch consisted of dal (lentil), sabzi (vegetable curry) and rice, a staple in the region’s tea gardens. The gardens often see feast on Fridays with occasional fish or meat as the weekly wages are paid ahead of the weekend. Before the Assam assembly election dates were announced, a fifty rupees increment was announced by the state government, making the daily wage of Rs 167 to be increased to Rs 217.

During his interaction with the workers, Gandhi reiterated Congress’s “guarantee” of Rs 365 daily wage for the garden workers within “six” hours if being voted to power. “We will make our ‘guarantee’ of Rs 365 daily wage to Assam tea workers a reality,” he said. “The Congress party has fulfilled its guarantees like waiving farmers’ loans immediately after assuming power in the States of Chhattisgarh and Madhya Pradesh. In Assam, the Congress will ensure that the tea garden workers receive a daily wage of Rs 365,” Gandhi said.

On February 23, the state government announced the enhanced daily wage. Weeks later, the Gauhati High Court ordered the state government not to take any action against the Indian Tea Association and 17 tea companies, which own nearly 90 per cent of the state’s over 800 gardens, until a case, filed challenging the Assam Labour Department’s notification on the wage hike, is disposed of. Hearing the petition, Justice Michael Zothankhuma said the state authorities “shall not take any coercive action” till March 15, when the case was next heard.

Meanwhile, the Assam Tea Tribes Students Association (ATTSA) has called for a complete shutdown of tea estates across the state on March 22 over enhanced daily wages of plantation workers. The powerful student’s body accused the ruling BJP government of using the wage hike as an aid to garner votes. The March 22 shutdown assumes significance ahead of the first phase of polling on March 27, which covers 47 seats, mostly in the tea-growing areas of eastern Assam. Prime Minister Narendra Modi, in an attempt to soothe the public anger amid the demand for a pending ST status, will visit the Chabua tea belt on March 20 and Kamarpara of Golaghat district on March 21.

Nearly eight hundred tea estates and more than 1.5 lakh small tea garden of Assam nestles 18 per cent of Assam’s 3.3 core population. With its influence in around 39 constituencies of the state election, a franchise of around 40 lakh tea votes holds the key to the political throne. Three BJP MPs: Pallab Lochan Das, Rameshwar Teli and Kamakhya Prasad Tassa, represent the tea garden community.

The guarantee of increasing the daily wage to Rs 365 has been promoted as part of Congress’s elections campaign agenda for the Assam assembly polls. To be released by Rahul Gandhi on March 20 in Guwahati, Congress’s election manifesto is pitched as a game-changer. Congress General Secretary Priyanka Gandhi Vadra earlier made the guarantee in her election visit to Assam. Gandhi had then engaged in plucking tea leaves in Sadaru Tea Estate of Biswanath district and had visited the Kamakhya Prasad Tassa’s house where she enjoyed liquor tea and even cradled the baby of the family. A move which many assessed to be potent enough to melt heart and swing votes.

Tea plantation employers believe the election manifestos of political parties should include something positive for the tea industry.

According to the manager of Khoomtai Tea Estate of Upper Assam, Sarabjit Singh Marva, tea should be realised in terms of auction prices as the state will generate more revenue through SGST. “Double the auction prices, you can double the state SGST revenue,” he explains. “Just double the average realisation of tea in auctions….tea industry will double the wage,” he said.

He said all packagers buying Assam tea should have their packaging units in Assam in terms of packaging. This will again add to the state revenue through SGST. Implementation of the Plantations Labour Act (PLA), 1951, in the small tea growers should also be encouraged to segment a one industry one wage policy. Apart from this implementation of welfare schemes by the government in all tea estates will benefit both the industry and the workers.

The announcement was attacked by the BJP, who termed the Congress leader’s promise a “lollipop” and accused the party of failing the tea garden workers. “It’s a lollipop. From where shall Rahul Gandhi or Congress give the wage? Where was the Congress when tea garden workers and the tea tribes were agitating for the rights and dues for the last 60 years?” said BJP candidate from Doomdoma and former Secretary of All Assam Chah Mazdoor Sangthan, Rupesh Gowala.

Quoting 15th-century Indian mystic poet Kabir Das’s couplet “Dukh mein sumiran sab kare, sukh mein kare na koi” (In anguish everyone prays to Him, in joy does none), Gowala said the Congress government had failed the people when it was in power. “The long-pending demand of Schedule Tribe status to the community was never heeded. They offer lame concerns. They are not a party who will give recognitions to the mazdoor,” he added.

“If the congress is so concerned, why did the party not give a representation in the North Bank and only one in Tinsukia district. This shows the double standard of the party,” he further said.

The saffron party has introduced the ‘Chah Bagicha Dhan Puraskar Scheme’ with the latest allocation of Rs 3,000 to the workers and Rs 12,000 to every pregnant female worker. The party has assured that the schemes will continue. It also promised free breakfasts, midday meals to children and 10 per cent reservation in colleges.

Finance Minister Nirmala Sitharaman has set aside Rs 1,000 crore in the 2021 Budget for Assam and West Bengal’s workers’ welfare. In 2016, the wind of change had blown across the tea gardens in Assam, which gave BJP the mandate. Whether a new taste will brew in 2021 or go with the tested one remains to be seen.