Delhi is the most polluted capital city globally, says report 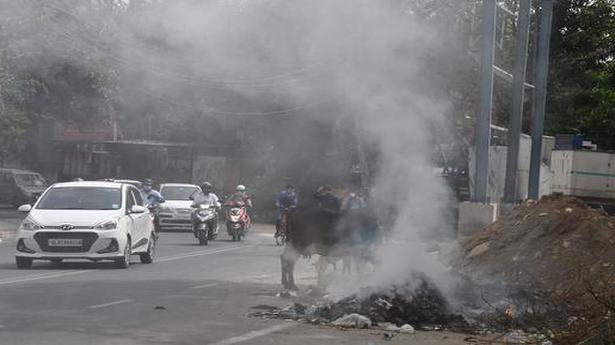 Delhi remained the most polluted capital city in the world. India, on the whole, had average annual PM 2.5 (particulate matter) levels higher in 2020 than in 2019, according to a report from IQ Air, a Swiss air quality technology company, specialising in protection against airborne pollutants, and developing air quality monitoring and air cleaning products.

Delhi’s concentration levels, based primarily on data from the Central Pollution Control Board, were 84.1 µg/m³, a 15% improvement from the 98.6 µg/m³ recorded last year and attributed to the lockdown. Though the pollution levels were higher — 51.9 µg/m³ this year compared to 58.9 µg/m³ last year — India was only the fifth most polluted country, unlike last year, when its air was the third most noxious.

Bangladesh, Pakistan, Mongolia and Afghanistan were the countries this year with worse average PM 2.5 levels than India, says the report. China ranked 11th this year, a deterioration from the 14th last year in the table of 106 countries that were evaluated. The pollution levels are weighted averages, meaning that the population of a country influences the pollution values reported.

In 2020, 84% of all monitored countries observed air quality improvements. Other improvements in major cities over 2019 included a 11% drop in Beijing, a 13% drop in Chicago, a 17% drop in Paris and a 16% drop in London and Seoul.

However, of the 106 monitored countries, only 24 met the World Health Organization annual guidelines for PM 2.5, the report underlined.

When ranked by cities, Hotan in China was the most polluted, with an average concentration of 110.2 µg/m³, followed by Ghaziabad in Uttar Pradesh at 106. Of the 14 most polluted cities, 13 were in India.

In spite of being a pandemic year, 2020 was a particularly severe year for agricultural burning, an illegal but common practice in which farmers set fire to crop residue after a harvest. Farm fires in Punjab increased 46.5% over 2019.

Air pollution constitutes the world’s biggest environmental health hazard, contributing to as many as 7 million premature deaths globally per year (more than three times higher than deaths associated with COVID-19).

In 2020, the spread of COVID-19 raised new concerns as exposure to particle pollution was found to increase vulnerability to the virus and its impact on health. Early reports suggest that the proportion of COVID-19 deaths attributed to air pollution exposure ranges from 7% to 33%.