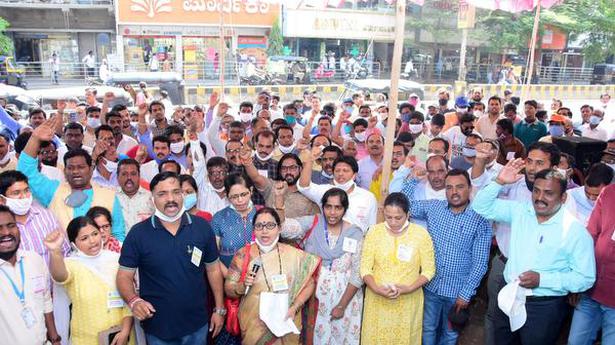 The two-day bank employees strike opposing the Union government’s efforts to privatise the banking sector received good response across the seven districts of the Kalyana Karnataka region on the first day on Monday.

Employees of all the major nationalised banks, including State Bank of India, Canara Bank, Corporation Bank (now Union Bank of India), Karnataka Bank and Bank of Baroda, participated in the strike by not reporting for duty forcing the banks to close their operations.

People, who were unaware of the strike, were found going through difficulties in transacting their banking tasks.

Though regular activities in almost all branches of nationalised banks in the region were disrupted, most of their ATMs functioned as usual. However, in some places, the machines had been rendered “out of order” due to unavailability of money. Private banks such as ICICI Bank, HDFC Bank and Axis Bank functioned as usual.

Hundreds of agitating employees staged demonstrations and agitations across the cities and towns in the region holding placards and banners opposing the Union government’s move.

“The very purpose of establishing State-owned banks and nationalising private banks was to collect savings from the maximum number of people and distribute it among the maximum number of producers. Privatising banks essentially means collecting money from the maximum number of people and distributing it among a few big corporate houses. Banks without State control tend to collapse due to greed of a few and inflict irreversible damage on depositors. Already, 550 private banks have collapsed and most of the depositors have lost most of their savings. Privatisation of the banking sector would thus lead to the collapse of the banking sector and, in turn, the collapse of the economy,” a leader addressing the agitators outside a Canara Bank branch in the Supermarket area in Kalaburagi said.

Many leaders who spoke on the occasion strongly criticised the Union government for its “disinterest” in strengthening the public sector while showing enthusiasm in selling government banks that were doing well to private players.