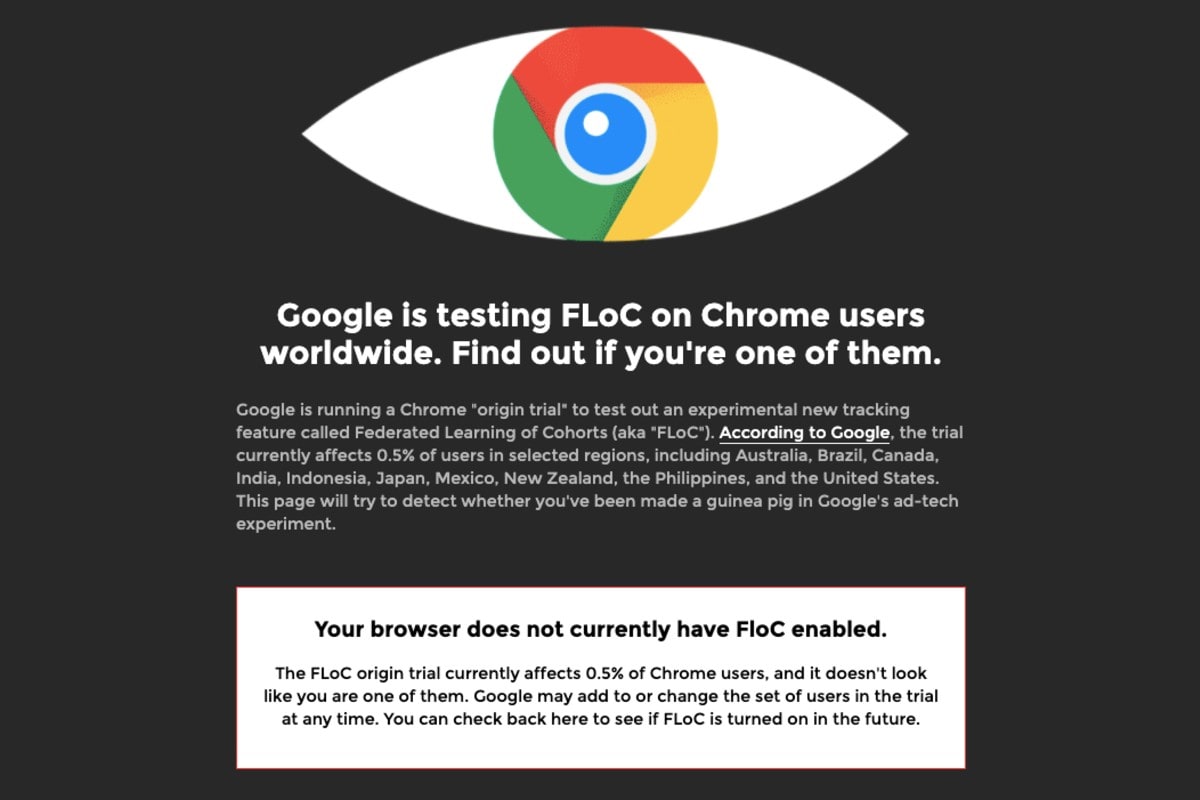 Google Chrome has a new way to track you, in a method that the company called Federated Learning of Cohorts, or FLoC. The company has claimed that it is a better way to give advertisers (read: its revenue team) what they want and also leave some semblance of privacy to its users. However, privacy advocates have since spoken out against it, and especially its automated imposition of FLoC trials upon a randomised selection of users. What’s particularly surprising to note is how Google has begun its trials without any clear disclosure of the same, and FLoC trials for 0.5 percent of all Chrome users are now active alongside standard cookie tracking as well.

Why is Google FLoC a threat to you

To understand simply, FLoC claims that it will no longer allow websites across the internet from tracking you by inserting scripts that trace what you do on the internet. While that sounds great, things aren’t particularly all that simple. With FLoC, Google is essentially bringing more control of how user activity is tracked under its own umbrella, while not exactly benefitting users as much as it would want everyone to believe. Essentially, FLoC reads your browsing activity and history, checks in on all the sites that you have visited, and classify them into compartments, or ‘cohorts’.

These cohorts, as Google claims with its FLoC whitepaper, will “anonymise” a user’s identity, but nevertheless, still group your activity together with similar ones of others – therefore reading absolutely as much of what you do and who you are, as what they do already. Google claims that FLoCs will also respect “sensitive” cohorts by not sharing that piece of information with advertisers – such as a user searching for a medical condition, or a specific aspect of their race. However, this information too is being gleaned by Google as sensitive with its own metric, and it does not leave the ability to deduce what’s sensitive and what’s not to users. Bodies such as EFF have raised this among other points, defining how very clearly invasive and unbalanced FLoC is.

How you can know, and what you can do

To find out if Google Chrome has silently activated FLoC on your account, simply head to the EFF’s FLoC tracking site, which will clearly tell you if the company has activated the new tracking step for you or not. While Google claims that it will, in future, enable superior privacy sandbox controls built directly into Chrome, such controls are still not available – even in beta builds of Chrome.

If it has, users can choose to use a more privacy centric web browser, such as Mozilla Firefox, to prevent Chrome from imposing its will on you. Users can also choose to install privacy first search engine DuckDuckGo’s FLoC browser plugin that automatically detects Google’s behavioural tracking and prevents it from tracing your activity on the internet. Alongside, users are advised to stop Google from tracking third party cookies. While the former is ideal for users who are fine with an alternate browser, the latter is ideal for those who still want to use Chrome, but want to prevent Google from imposing FLoC on them.