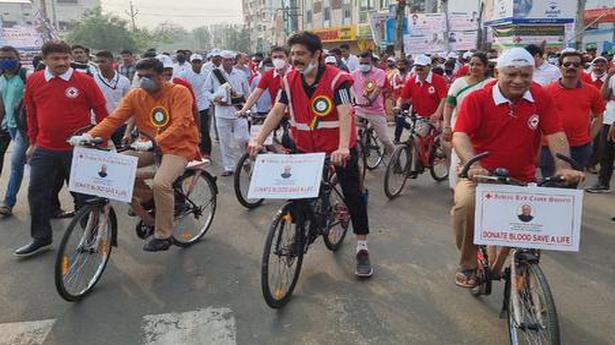 Indian Red Cross Society State president A. Sridhar Reddy on Tuesday announced that IRCS would construct a cancer hospital in Srikakulam as many patients were facing troubles due to lack of treatment for the dreaded disease in the region.

Along with Srikakulam Collector J. Nivas and Superintendent of Police Amit Bardar, he formally inaugurated a State-wide cycle rally as part of the centenary celebrations of IRCS which was established in 1920. The rally, which began simultaneously in all 13 districts, would culminate on March 25 at Amaravati where Governor and IRCS State Chairman Biswa Bhusan Harichandan would receive the volunteers.

Dr. Sridhar Reddy said that nearly 25 lakh students would be enrolled in Junior and Youth Red Cross wings by 2022. “Youngsters’ active involvement in organising blood donation camps, plantation drives and other service activities would make them good citizens in the future. All IRCS district wings have been directed to take the support of schools and colleges in achieving the target,” he said.

He added that IRCS Srikakulam chairman P. Jaganmohana Rao’s suggestion for the construction of a cancer hospital would be considered positively. Dr. Sridhar Reddy lauded him for constructing both an orphanage and old age home on the same premises.

Mr. Nivas appreciated the services of IRCS’s volunteers in ensuring a decent final journey for people who died of coronavirus.

Mr.Amit Bardar said that the frequent blood donation camps organised by IRCS were helping save the lives of road accident victims. Srikakulam Joint Collectors Sumit Kumar, R. Sriramulu Naidu, IRCS members Geeta Srikanth, Nuka Sanyasi Rao, Balivada Malleswara Rao and others participated in the rally. Mr. Jaganmohana Rao said that nearly 5,000 volunteers from all districts would reach Amaravati by March 25. He said that special care was being taken to ensure that they reached the destination safely.