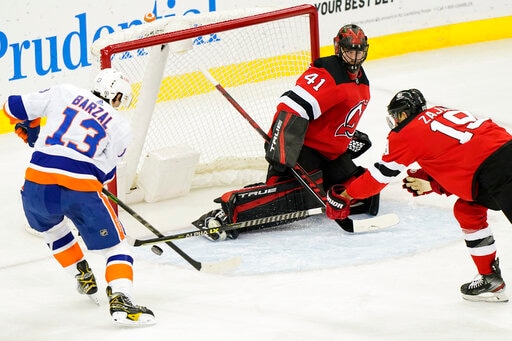 The Devils thought they had won 27 seconds into overtime on a goal by P.K. Subban, but a lengthy review showed Jesper Bratt was offside.

Beauvillier beat Scott Wedgewood on the Islanders third attempt to extend the shootout, and Wahlstrom extended New Jerseys winless run at home to 0-10-1.

Kieffer Bellows and Brock Nelson scored in the first period for the Islanders, who pushed their points streak to 11-0-1. Rookie Ilya Sorokin made 29 saves, allowing only Nikita Gusev to score in the shootout.

Janne Kuokkanen and Yegor Sharangovich scored for New Jersey, while Wedgewood made 32 saves, including an in-close stop on Casey Cizikas in overtime.

Carolina moved into the Central Division lead at 20-6-1, a point ahead of idle Tampa Bay and Florida.

Anthony Mantha scored his eighth goal of the season for Detroit with just 9.4 seconds left in regulation, spoiling Nedeljkovics bid for his second career shutout.

Niederreiter gave the Hurricanes a 2-0 lead early in the third period, scoring off a pass from Sebastian Aho.

Hamilton opened the scoring with 4:47 left in the second period. Instead of passing to Hurrucanes scoring leader Aho on a 2 on 1, Hamilton kept the puck and beat goalie Jonathan Bernier from the right circle.

Victor Rask and Joel Eriksson Ek also scored to help Minnesota move within two points of West-leading Vegas. Minnesota is 11-2-1 in its past 14 games, has won four straight overall and seven in a row at home.

Cam Talbot made 21 saves after shutting out the Coyotes 4-0 on Friday night in the opener of the three-game set.

DENVER: Philipp Grubauer made 27 saves, Andre Burakovsky and Nazem Kadri each had a goal and an assist and Colorado beat Los Angeles.

Grubauer nearly had another shutout before Kurtis MacDermid ended the bid early in the third period.

COLUMBUS, Ohio: Alexander Radulov returned after missing 15 games and scored in the third round of the shootout to lift Dallas past Columbus.

The victory came a day after Dallas lost to Columbus in the closing seconds of overtime. Radulov had been sidelined with a lower-body injury.