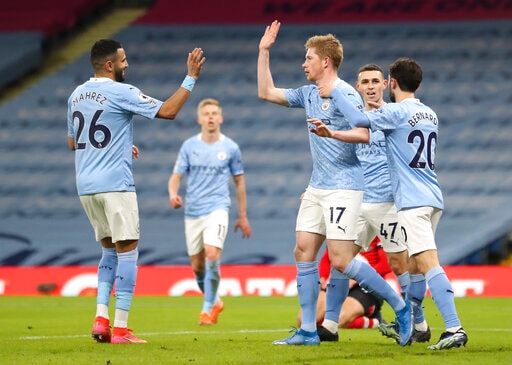 A look at whats happening in European soccer on Saturday:

The FA Cup leg of Manchester City’s pursuit of a quadruple resumes with the Premier League leader playing Everton in the quarterfinals. Carlo Ancelotti’s Everton has won just four of its last 11 home matches in all competitions, with three of those victories coming in the FA Cup, two against lower-league opposition. Promotion back to the Premier League is the priority, but Jonathan Southgate’s Bournemouth side has a chance to reach the FA Cup semifinals for the first time if it can oust Southampton. The only Premier League fixture is between Brighton and Newcastle, who are both trying to avoid being sucked into the relegation zone.

Real Madrid visits Celta Vigo without defender Sergio Ramos, who was dropped from Zinedine Zidanes squad. The club did not indicate why Ramos will not travel to northwest Spain for the match. The defender played the last two games after returning from a knee injury that had sidelined him since January. Madrid will also be without injured first-choice players Eden Hazard and Dani Carvajal. Madrid, which is the only Spanish club to reach the Champions League quarterfinals, is six points behind La Liga leader Atltico Madrid and two points behind second-place Barcelona. Led by Iago Aspas nine goals, Celta has lost only once in its last eight games. If Madrid loses, Sevilla could pull level on points with a win at Valladolid. Also, Athletic Bilbao hosts a struggling Eibar in a Basque Country derby, while last-place Huesca faces Osasuna seeking a win that could lift it out of last place if Eibar loses.

There are two relegation battles in Serie A as Cagliari visits Spezia and bottom club Crotone hosts Bologna. Cagliari has lost just once since Leonardo Semplici took over as coach and that was to Juventus and a Cristiano Ronaldo hat trick. The Sardinian side can move out of the relegation zone with a win at Spezia, which is only four points above the bottom three and without a win in its past five matches. Crotone is eight points from safety, while Bologna has inched nine points clear of the drop. The match between Serie A leader Inter Milan and Sassuolo was postponed because of coronavirus cases in the Nerazzurri camp.

Bayern Munichs quest for a record-extending ninth consecutive Bundesliga title continues at home to southern rival Stuttgart. Bayern striker Robert Lewandowski needs only eight more goals from the remaining nine rounds to tie Gerd Mllers 49-year-old record of 40 in a season. Stuttgarts Saa Kalajdi is also in fine form having scored in his last seven league appearances. Bayerns defense has not been its strength this season. Kalajdis goals have helped propel Stuttgart, which was promoted last season, to a commendable eighth place, and American coach Pellegrino Matarazzo will be sending his team out to attack in Munich. Last-place Schalke hosts Borussia Mnchengladbach for a duel between the leagues most desperate teams. Schalke quickly needs points to maintain any hope of a miracle escape from demotion, while Gladbach has lost every game it has played seven altogether since the club announced coach Marco Rose is joining Borussia Dortmund next season. Dortmund is doing just fine without him and has moved back up toward the all-important Champions League qualification places before it visits Cologne. Union Berlin visits Eintracht Frankfurt for a game with European qualification places at stake, and Werder Bremen welcomes third-place Wolfsburg.

The Jorge Sampaoli effect has Marseille fans hopeful that a Europa League spot is possible after two consecutive wins and a marked improvement in team spirit. Fifth-place Marseille faces a trip to southern rival Nice, which is only in 12th place but has played some good football at times. If Marseille loses, then Metz will move up to fifth spot on goal difference with a home win against Rennes in the other game. Rennes started the season very well but the Brittany side has slipped down to eighth spot. Last weekend’s win stopped a run of five straight league defeats and followed a coaching change, as Bruno Genesio replaced Julien Stephan.