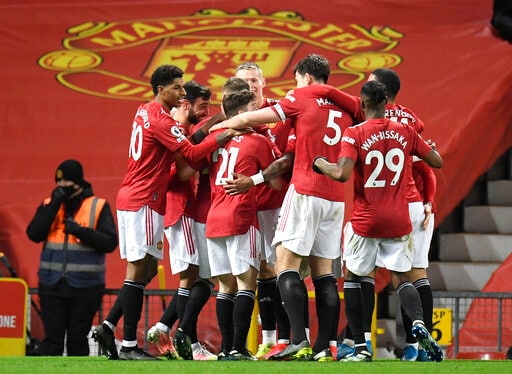 With the Europa League trip to AC Milan and FA Cup quarterfinal at Leicester coming up before the international break, Ole Gunnar Solskjaers side kicked off an important week with a solid performance on Sunday.

Mason Greenwood twice struck the post on a night when Dawsons own-goal proved the difference eight minutes into the second half. Bruno Fernandes corner was touched on by Scott McTominay and the unsighted Dawson turned into his own net.

West Ham was set up by former United manager David Moyes to frustrate the hosts and failed to muster a shot in the first half the first Premier League side to manage that since March 2018.

But the Hammers also gave little away in the opening period, with goalkeeper Lukasz Fabianski superbly tipping a low Greenwood shot onto the post when frustrated United had their best chance.

United is 14 points behind leader Manchester City and a point ahead of Leicester, which Sheffield United 5-0. West Ham is fifth.