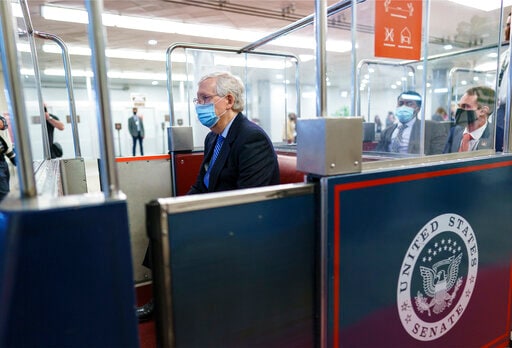 McConnell unleashed the dire forecast of a Senate that would all but cease to function, implying that Republicans would grind business to a halt by refusing to give consent for routine operations from the start time for sessions, to the reading of long legislative texts, to quorum call votes.

Let me say this very clearly for all 99 of my colleagues: Nobody serving in this chamber can even begin can even begin to imagine what a completely scorched earth Senate would look like, McConnell said in a Senate speech.

McConnell said the partisan gridlock of the Trump and Obama eras would look like child’s play compared to what’s to come.

The GOP leader’s stark remarks landed as the Biden administration is taking a victory lap over the just-passed $1.9 trillion American Rescue Plan, the big COVID-19 relief package that was approved by Congress without a single Republican vote. Republicans acknowledged privately they are struggling to pry attention away from the bill, which appears to be popular among Americans benefitting from $1,400 cash payments, vaccine distribution and other aid, as the GOP focuses on future battles.

With the Senate evenly divided, 50-50, the rest of Biden’s priorities face a tougher climb in Congress. While the Democratic-controlled House is able to swiftly approve a long list of potentially popular bills to expand voting rights, extend gun purchase background checks and other measures the rules of the Senate are more cumbersome. It typically requires 60 votes to break a filibuster to advance most legislation.

Senate Democratic leader Chuck Schumer brushed off McConnell’s remarks as a diversion and said he hopes to work with Republicans on the upcoming bills, but said all options for filibuster changes are on the table.

Senate Democrats are talking privately about changing the decades-old rules for the filibuster, which allows a single senator to block a bill by objecting. In earlier eras, senators would seize the floor, speaking for hours about their objections, as was done in the Hollywood movie Mr. Smith Goes to Washington. They also used it to stall civil rights legislation in the middle of the 20th century.

Supporters of the process say it protects the rights of the party not in power, but detractors argue it is being used to block popular bills.

It takes 51 votes to change the Senate rules and do away with the filibuster, and Democrats do not appear to have support from within their ranks to do so, even with Vice President Kamala Harris serving as the tiebreaker. At least two Democratic senators, Joe Manchin of West Virginia, and Kyrsten Sinema of Arizona, have signaled their objections, but there may be more.

Bidens preference is not to make changes in the Senate filibuster rules, Press Secretary Jen Psaki said at the White House. But she added, He is also open to hearing ideas and those discussions will happen in Congress.

The Senate will be put to the test in the weeks ahead. As senators start considering the House-passed bills, Democrats will be testing Republican willingness to participate in the legislative process by amending the bills toward eventual passage.

If Republicans simply block the bills, Democrats are expected to lean in more forcefully to try to change the rules.

Some Democrats want to require senators who engage in filibusters to be forced to hold the floor, as Jimmy Stewart did in Mr. Smith Goes to Washington. These days, senators can simply signal their filibuster, which Durbin derided as Mr. Smith Phones it In.

We must change the rules, Durbin said.

McConnell warned Democrats not to take the next step, unveiling the actions he could take in retribution.

This is an institution that requires unanimous consent to turn the lights on before noon, to proceed with a garden-variety floor speech, to dispense with the reading of a lengthy legislative text, to schedule committee business, to move even non-controversial nominees at anything besides a snails pace, he said.

Changes to the filibuster have been underway for a decade, an escalating procedural arms race alongside the nation’s rising partisanship.

Democrats did away with the filibuster rules to overcome Republican stonewalling of President Barack Obama’s executive branch nominations and some judicial nominees.