Meet the mother-son duo from Kochi who drove pan-India, covering 16,800 kilometres in 49 days 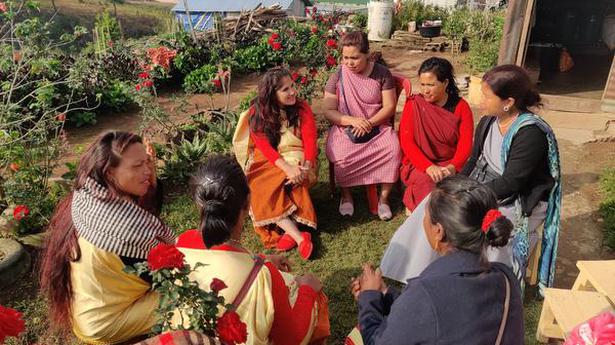 Mitra Satheesh began her car journey, Oru Desi Drive, in March, when COVID-19 cases were falling. The second wave forced her to cut it short

“The situation worsened by the time I reached Guwahati. I had three choices: to leave my car behind and fly home, send my son home alone or to continue with the trip,” says Mitra Satheesh who started her pan-India car journey, Oru Desi Drive, in March this year. At that point, COVID-19 cases were falling, vaccination drives had begun, and travel had been allowed. Along with her 11-year-old son Narayan, Mitra set off from Kochi in an attempt to build confidence about restarting local travel. Apart from family and friends, she also had the support of India Tourism. Her original plan was to cover 20,000 kilometres in 100 days. But the second wave forced her to cut it short. However, she still managed to travel 16,800 kilometres in 49 days, in her Maruti S-Cross.

An Assistant Professor at the Government Ayurveda College in Tripunithura, Mitra says she also wanted to be back at work since “cases were rising in Kerala. I would be needed here.” Mitra was deputed to work at the COVID First Line Treatment Centre (CLFTC) last year.

Keralite Mitra Satheesh with her son Narayan in Kashmir, which was part of her pan India car drive , ‘Oru Desi Drive’

Mitra Satheesh with son Narayan at Sonamarg in Kashmir during her pan India car drive, Oru Desi Drive, in March 2021

When Mitra conceptualised Oru Desi Drive, she had looked at exploring rural arts and crafts along the way. At Pattamadai in Tamil Nadu, she learnt about the mats woven from grass. “The weavers are primarily Muslims and the mats are part of the wedding trousseau across communities,” says Mitra. At Cheriyal, on the outskirts of Hyderabad, she got to see the ancient art of scroll painting using natural dye. “The village is also famous for making masks using tamarind powder. Now the art is practised by just two or three families,” she adds. In Chattisgarh, Mitra explored the ethnic crafts of the Bastar region that uses bell metal, wrought iron and Tuma, the decorative art from gourd and the art and craft in wood and terracotta at Kondagaon. West Bengal has lots to offer, says Mitra and talks about the famed terracotta Bankura horses and earthen tiles temples of Bishnupur and the mosques of Malda.

Her experience in Assam is one of overwhelming hospitality. “Everyone greets you by draping the traditional shawl around you. I was very touched by their warmth,”says Mitra who was charmed by the life in the pot-and boat-making village of Salmora and the houses on stilts at Majuli. She met people of the Angami tribe in Nagaland and the Zheme of Yang Khullan, a village in a remote mountain far from Imphal. Her most exciting moment here was a sighting of the rare “dwarf pig”. Luckily, these remote places were not in the grip of the rampaging pandemic and so “it was a great learning experience for my son and I.”

Mitra’s most unforgettable experience was an impromptu visit to Vaishno Devi. As the road from Jammu to Srinagar was blocked she decided to take the chopper service to the temple. “The ride was a first for both of us and thrilling, but inclement weather cancelled the service on our return. We trekked 14 kilometres downhill and did part of the trek on horseback, which was very scary,” she says. Sighting the rhino and herds of elephants at Manas National Park in Assam was a thrilling sight for her, just as seeing snow for the first time was for Narayan. “He went crazy with delight,” she says laughing.

Another aspect of this journey was discovering the culinary landscape of the various places. At Atreyapuram near Rajamundhry in Andhra Pradesh, each home had clay pots on chulhas outside. “The entire village is involved in making poothrekulu, a sweet made of rice starch, dry fruits and jaggery.” Another gastronomic adventure was eating red ant chutney with the Dhruva tribes at Jagdalpur in Chhattisgarh. She also enjoyed watching the preparation of chena poda or baked cheese, a speciality of Pahla village, in Odisha. The dish is made at night. Matikalda, a Bodo dish made with jute leaves and weeds and Komal chawal, a rice, which doesn’t need boiling, too were new experiences in Assam.

When Mitra arrived in Shillong, the capital of Meghalaya, the State had imposed a lockdown. So, she drove to Bardang in East Sikkim. From there, she zipped through Bihar, Uttar Pradesh, New Delhi, Haryana and reached Ludhiana. She then drove up to Jammu and Kashmir. After a quick trip to Srinagar, Sonmarg and Zojila Pass — all of which she remembers for “awe-inspiring scenery” — Mitra headed back to Kerala via Vadodara, Daman, Mumbai, Pune, Belgaum, Mangalore, and Kozhikode to reach Kochi. She accomplished this in four days, as “by that time, all State roads were under lockdown, no shops were open,” she says.

Of course there were a few blips like getting lost in Tripura, encountering a raging storm in Sikkim, and having minor issues with the police in Rajasthan and Mumbai. Throughout the trip, she used GPS to navigate and it’s “90% reliable,” she says.

When she finally got home, she went straight into isolation, due to the COVID-19 protocol. “My son and I are in quarantine and are reliving Oru Desi Drive,” she says.

Among Mitra’s most treasured memories are:

A meeting with people from the elusive Bonda tribe who come out of the their forest dwellings to visit the haat (market) at Onkadelli in Koraput, Odisha, only on Thursdays.

A meal with the Gadaba tribe at Kangrapod, in Southern Odisha.

A day spent with the Dhurva tribe at Jagadalpur.

Watching the famous Gaur dance, performed by the Madiya tribals who wear the bison horn headgear, at Anjer in Madhya Pradesh.

Interacting with women of Jowai village in Meghalaya who wanted to learn ways to empower Women Self Help Groups.

Facebook
Twitter
Pinterest
WhatsApp
Email
Print
Previous articleApple Announces New Accessibility Tools for Watch and iPad to Aid People with Disabilities
Next articleGoogle Will Have 80 Million Android TV And Google TV Remotes Out There, And You’ll Be Holding One