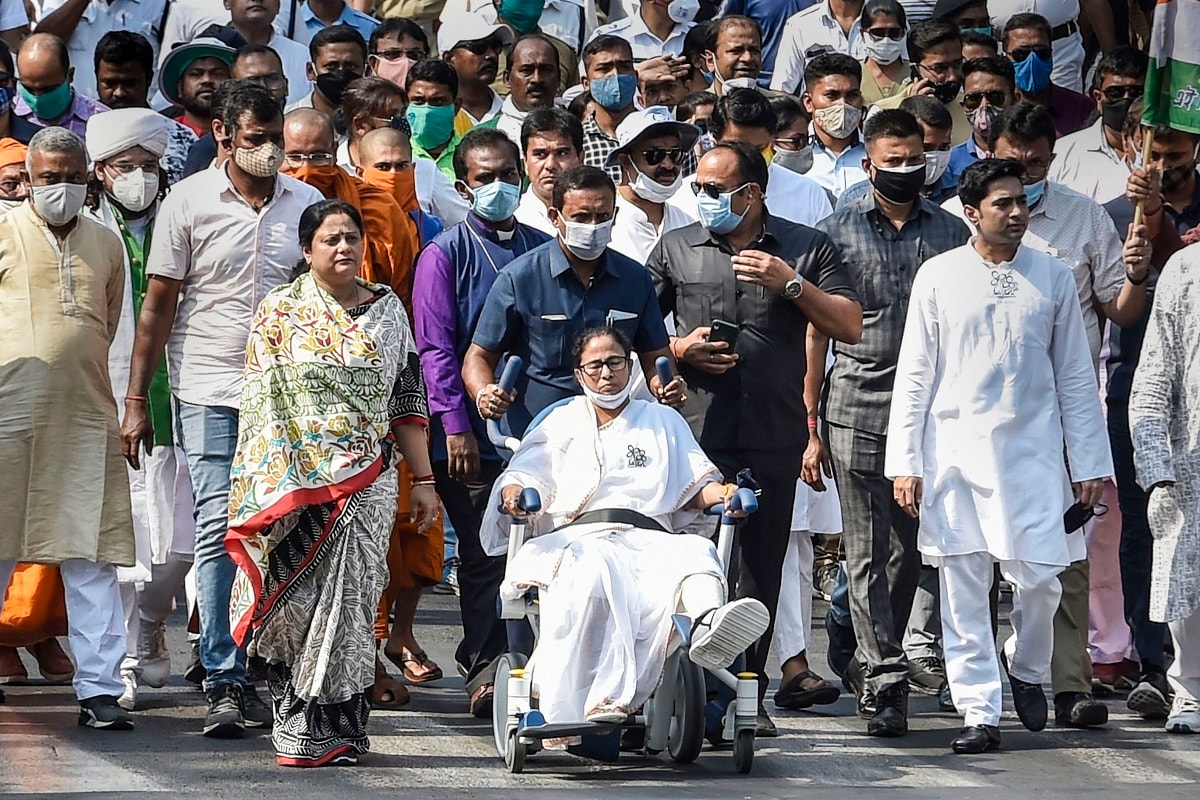 Days after she was injured and hospitalised during an election campaign in Nandigram, West Bengal Chief Minister and Trinamool Congress supremo Mamata Banerjee on Sunday attended her first public event, as she led a road show in Kolkata on a wheelchair and declared an injured tiger is far more dangerous.

With the Election Commission declaring the Nandigram incident wherein she suffered injuries in her leg as an accident and not an attack as claimed by her, Banerjee said she had more pain in her heart as democracy was under attack.

Accompanied by senior TMC leaders, Banerjee was seen greeting the crowd with folded hands, with security personnel pushing her wheelchair. Banerjee joined the five-km road show from Mayo Road to Hazra More in the city, as part of observing ‘Nandigram Diwas’ to commemorate the killing of 14 villagers in police firing during the anti-land acquisition protest in 2007.

“Doctors advised me against going out for campaign today. But I felt that I should participate in today’s rally as we have already lost a few days due to my injury. “My pain is not greater than the suffering of people as democracy is being trampled through dictatorship,” she said.

Banerjee said she will leave for Durgapur Sunday evening and address two rallies on Monday. Carrying posters and placards hailing Banerjee as the “daughter of Bengal”, TMC supporters raised slogans against the BJP and called for “defeating the outsiders” in the assembly elections. The TMC activists also chanted the slogan “Bhanga Paye Khela Hobe!” (Will play with broken leg), a reference to Banerjee’s leg injury.

“We will continue to fight boldly! I’m still in a lot of pain, but I feel the pain of my people even more. In this fight to protect our revered land, we have suffered a lot and will suffer more but we will NEVER bow down to COWARDICE!” Banerjee tweeted minutes before arriving at the venue.

Banerjee said she chose to fight the upcoming Assembly election against “anti-Bengal forces” from the “historic” constituency as a mark of respect for the victims. Recalling the incident, Banerjee said that farmers are the pride of Bengal and the state government is working for their development. Banerjee’s once-close aide and now her opponent from the BJP, Suvendu Adhikari, was quick to respond to the statement, saying those who “had forgotten Nandigram all these years are now coming here to seek votes.”

The Trinamool Congress supremo had returned home from the state-run SSKM Hospital on Friday evening, after receiving treatment for the injuries she allegedly sustained while campaigning in her constituency in Nandigram in East Midnapore earlier this week.

Earlier in the day, the EC, while ruling out any attack on Banerjee, criticised the “flippant attitude” of the chief minister’s Director Security Vivek Sahay. The commission said Sahay was sitting in the bullet-proof car meant for the VVIP, while the chief minister was using a normal vehicle. “The chief minister flouted the prescribed security norms/protocols, which could have led to tragic consequences,” the poll body said.