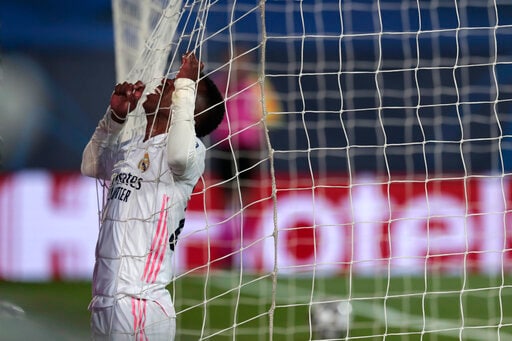 MADRID: Real Madrid defeated Atalanta 3-1 on Tuesday to return to the Champions League quarterfinals after two consecutive eliminations in the last 16.

Madrid advanced 4-1 on aggregate after Karim Benzema led the way to victory in the first half following a blunder by Atalanta goalkeeper Marco Sportiello, one of the squad changes made by coach Gian Piero Gasperini from the 1-0 first-leg loss in Italy.

Captain Sergio Ramos and Marco Asensio sealed Madrid’s victory by scoring a goal each in the second half. Atalanta’s lone goal came with a free kick converted by Luis Muriel late in the game.

Sportiello tried to play from his area but misplayed his shot and the ball went directly to Luka Modric, who entered the box and made a low pass for an easy goal by Benzema from near the penalty spot in the 34th minute. Sportiello replaced Pierluigi Gollini after the first leg and had been starting in Serie A since then.

It was the 70th Champions League goal for Benzema, making him only the fifth player to reach the mark in the competition after Cristiano Ronaldo, Lionel Messi, Robert Lewandowski and Ral Gonzlez. Only Ronaldo, Messi and Lewandowski reached the milestone quicker than the French striker’s 126 matches.

Atalanta was looking to make it to the last eight for the second straight time after a remarkable run in its debut season in the top European club competition. It had won all of its away games in the Champions League this season, including against Liverpool and Ajax.