Starlink Broadband’s Rs 7000 Reservation Offer Is Tempting, But I Am Still Holding Off 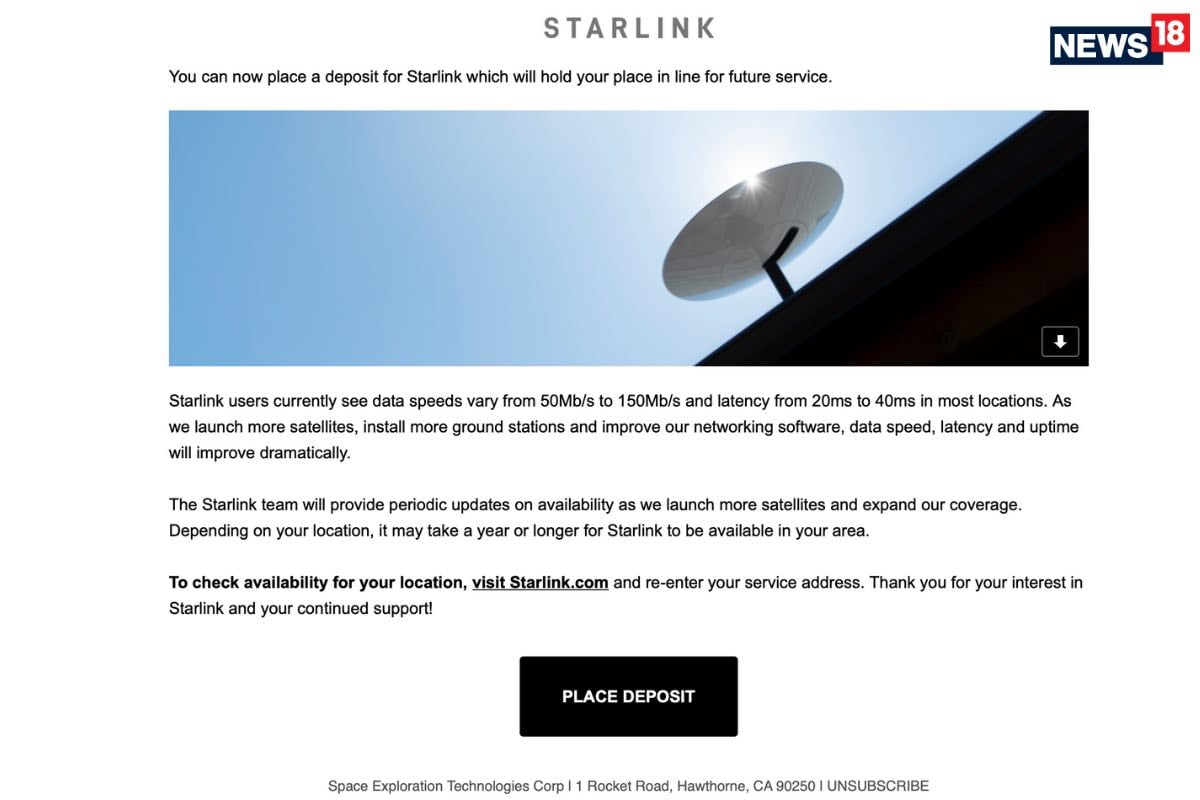 Satellite broadband beaming down high speed and instantaneous internet from the sky, once considered very futuristic and something we’d see in Hollywood movies, is now very much a reality that you and I can buy for our homes. And that’s exactly what the Elon Musk owned Starlink broadband wants to bring to your home. Satellite broadband that can deliver speeds up to 300Mbps with low ping rates as well. A few days ago, I received an email from Starlink based on my previous registration of interest in updates when the service is ready for rollout in India, asking me if I’d like to put down a deposit of $99 to reserve my spot for a priority installation when the Starlink satellite broadband service rolls out in India sometime in 2022.

That’s next year. And the deposit amount works out to around Rs 7,197 plus any fees that your credit card company may charge for currency conversions etc. I have to admit, the offer is quite interesting and enticing. Satellite broadband at home would be just so cool. Wired broadband just seems so dated. Or is it? First and foremost, what the $99 payment right now would give me is a priority spot in the line for when the Starlink satellite broadband services start in India. “By placing your Deposit Payment, you have established priority within your region for purchasing the Starlink Kit when available,” says Starlink, as part of the conditions that dictate the satellite internet reservation. Starlink says that the $99 deposit is fully refundable at any time, though you will forfeit your priority service access position. It is expected that the Starlink hardware kits will be in limited supply, at least in the initial months, of launch of the Starlink satellite broadband in India—if you really want satellite internet, you should reserve your spot in the line. The Starlink kit gets you a ‘phased-arrayed’ satellite dish, a tripod and a Wi-Fi router. You can download the Starlink app for iPhone and Android phones to determine the best install location at your home or office.

But here is where we stand. First and foremost, we don’t know exactly when Starlink will start beaming internet into our homes in 2022. We largely know that the Starlink satellite broadband will be available in most parts of India in the year 2022. That is next year. But we do not know exactly when—that crucial information should come at a later date. It may or may not matter to you, depending on whether you already have a fairly reliable high speed internet line at home. But if this is going to be critical for your work from home or remote working requirements, some clarity on the timelines would be worth the wait.

Secondly, there’s the installation aspect. And this is where I’ll have to draw parallels to the direct to home (DTH) television service, because the way the technology works is very similar. The Starlink satellite dish will need to be installed outdoors, that is in your apartment’s balcony, or the roof or somewhere outdoors in the premises if you have a larger home. somewhere where it is at the highest point possible with no trees, poles or structures getting in the line of site with the sky and therefore the satellite in the sky. The requirement is a clear “field of view” of the sky. Now, this sounds easier than it is. While you may see the sky as a never-ending canvas, connecting with a satellite’s signal is pretty similar to threading the eye of a needle. That is why you’d perhaps have seen DTH companies bestow their technical teams who do the installations, with complex signal meters to accurately position the dish antenna for optimal signal reception. Even slightly off, and the connectivity drops instantly.

“If you could see the connection between a Starlink satellite and your Starlink, it would look like a single beam between the two objects. As the satellite moves, the beam also moves. The area within which this beam moves is the ‘field of view’. If any object such as a tree, chimney, pole, etc. interrupts the path of the beam, even briefly, your internet service will be interrupted,” is what Starlink says. You also need to remember that satellites are placed at a particular slot in the orbit. Whether your home allows you direct line of sight for that zone in the sky is also a question—and all this will particularly be a challenge for those in apartment complexes and high-rise buildings. At this time, we don’t know what’ll the exact location of the SpaceX satellite constellation be, over India.

You may have often, if you use a DTH television connection (of course you do, who uses cable TV anyway), cursed in exasperation whenever the service dropped as soon as it got cloudy outside, started raining or there was lightning in the sky. The thick envelope of clouds and lightning basically acts as a barrier between your satellite dish and the satellite in the sky. The same limitation will also be true for the Starlink satellite broadband. “Heavy rain or wind can also affect your satellite internet connection, potentially leading to slower speeds or a rare outage,” Starlink confirms. The monsoon months, a freak shower or a thunderstorm can significantly limit your internet speeds or connectivity, with the satellite broadband technology.

Last but not least is the pricing bit. It is expected that the Starlink satellite broadband service will cost around $99 per month—at least that is what was confirmed by the early beta users who signed up last year. Whether there are any tariff plan changes for India, we do not know just yet. But if it is standard global pricing by Starlink, you’d be paying around Rs 7,000 per month for satellite internet. While the Starlink service currently offers speeds up to 150Mbps, it is expected that this will get an upgrade to up to 300Mbps sometime this year. That is what users in India will be able to take advantage of. The eventual plan is to offer speeds as fast as 1Gbps, directly from the satellites. Still, you’ll be paying a significant premium over fiber based wired broadband connections—Reliance Jio Fiber and Airtel Xstream, for instance, offer 1Gbps plans with unlimited data for around Rs 3,999 plus taxes per month.

There’s still some ambiguity in terms of the service, the costs and what the subscription entails. For instance, will there by data caps—as in the maximum data you can use every month before speeds are capped for the rest of the billing cycle? A fair usage policy (FUP), so to say? Not clear at this time, though Starlink has absolutely no data caps in place under the Starlink Beta program at this time.

All said and done, a satellite internet system in India could help push connectivity to the regions where wired broadband still remains unavailable, or at best offers inconsistent coverage due to distance or terrain. And even in the metro cities as well as Tier-1 and Tier-2 towns, the Starlink satellite broadband service could provide stiff competition for the fiber broadband and wired broadband players in India, including Reliance Jio Fiber and Airtel Xstream broadband, as well as a host of smaller broadband players who are often limited to specific regions in their scope of service.