Home Food Sunshine and sausages: Ready for a picnic
Food

Sunshine and sausages: Ready for a picnic 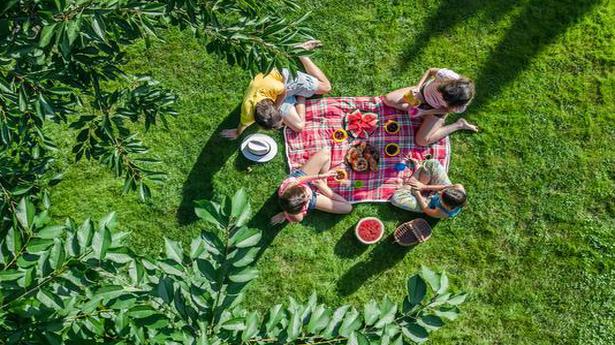 I like this season when it’s neither too cold nor too hot. Around this time every year we would gather at a friend’s farmhouse in Haryana for a day-long picnic. The fun was in planning out the menu, and I was usually given the job of preparing a chicken dish with rosemary. Sandwiches and cold cuts figured prominently in the list of finger food, as did kachoris and aloo sabzi. The adults lounged around; the kids — who’d never seen vegetables grow — dug out carrots and radishes, and everyone had a good time.

The friend is no more, the kids have grown up and order their kale online. But picnics haven’t lost their magic. And that is why, while reading a delightful little book called I’ll Be With You in the Squeezing of a Lemon by Elizabeth David last week, I zeroed in on a chapter called Picnics, and read it a second time just to get the flavour of all the food she mentions.

David, a British cookery writer, has good advice for all those planning a picnic. No foie gras or lobster patties, she says; stick to sausages, fresh cheese, black olives and French bread. She likes sandwiches, but for those who don’t, she suggests thin slices of ham rolled around frankfurters or frankfurters split in half and stuffed with Gruyère cheese.

“Some people like a rich moist fruit cake for a picnic, but I prefer a slab of the driest, bitterest chocolate available… to be eaten in alternate mouthfuls with Marie biscuit.”

I suppose most of us were drawn into British picnics as readers of Enid Blyton’s adventure books. The Famous Five had some great picnics, possibly because George lived by the sea. They ate potted meat (something that never failed to intrigue me), tinned sardines and pineapples, boiled eggs and chunks of chocolate. On an interesting website dedicated to Blyton, I found a droolworthy description of a hamper being readied for a picnic. There would be (she’d written) sandwiches, a fruit cake, Swiss jam-rolls, biscuits and lemonade.

But by far the nicest picnic story is the one by Gerald Durrell, figuring in The Picnic and Suchlike Pandemonium. Gerry’s brother Larry is coming home after 10 years, and their mother has a plan in mind. “I’ve thought of a wonderful way of welcoming Larry back,” she says one morning at breakfast (“Who wants to welcome him?” asks Leslie, helping himself liberally to marmalade).

Mother plans a picnic. “As usual, the quantity of food she prepared for the day would have been sufficient to victual Napoleon’s army during its retreat from Moscow. There were curry-puffs and Cornish pasties, raised ham pies and a large game pie, three roast chickens, two large loaves of home-made bread, a treacle tart, brandy snaps and some meringues; to say nothing of three kinds of home-made chutney and jams, as well as biscuits, a fruit cake, and a sponge.”

If you know Durrell, a lot happened: the picnic got waylaid by a moody car, inclement weather and a dead horse — “an extremely dead horse,” as Larry put it.

There are people who plan a picnic to such an extent that it’s not really a picnic but an elaborate meal eaten outside. David recalls a picnic in Marseille with some Americans. She and her friends went around buying all they thought would be just right for al fresco eating — olives, anchovies, sausages, bread, smoked fish, fruit and cheese.

Their friends, they discovered at the picnic, had different ideas altogether. They started unloading their car and out came a hatchet and down went several olive branches. Soon there was a blazing fire. Out of their baskets came cutlets, potatoes, bacon, skewers, frying pans, jars of ice, butter, table cloths and all the trappings of a minor barbecue.

“Since those days,” she writes, “I have had a good many opportunities of evolving a picnic technique on the lines laid down by Henry James, ‘not so good as to fail of an amusing disorder, nor yet so bad as to defeat the proper function of repasts.’”

The weather is still fairly pleasant and I could do with a well-packed picnic hamper, a mat and a book. With, if possible, a red gingham table cover.

The writer likes reading and writing about food as much as he does cooking and eating it. Well, almost.