Actress Taapsee Pannu is currently working on her upcoming project titled Shabaash Mithu. She has been regularly sharing her preparation updates from the film on social media. The movie is a biopic on former Indian women’s cricket team captain, Mithali Raj. Taapsee, who plays the lead role in the film, has been upping her cricket skills recently.

In the latest photo, Taapsee can be seen brushing her batting. She is seen wearing a white sleeveless top along with a pair of cricket gloves. From the looks, it seems she was in-between a practice session when the snap was clicked.

Further, to complete the post, the actress has used a famous quote by legendary cricketer Sachin Tendulkar. As expected, the photo has been much loved and appreciated by her fans who have liberally liked and left appreciative remarks on the picture. Many members of her Insta fam dropped in heart eye emoji, heart emoji and fire emoji to show their appreciation for the post.

Meanwhile, Taapsee also took to Instagram stories to share a series of shots of her practice session. In one of her stories, she can be seen putting on her cricketing gear, while in the rest, one can spot her mastering her batting skills at an apparent practice session. 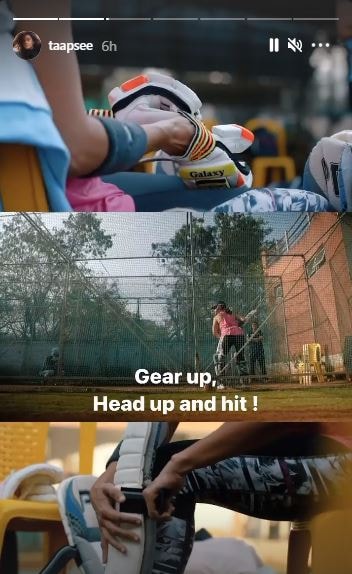 The actress had announced the movie in 2019 on Twitter. In the post, she had shared pictures of herself with Mithali and had also wished the latter on her birthday. Further, in a part of her caption, Taapsee mentioned that she is going to give her all to the film, to make sure that Mithali is proud of her depiction on-screen.

Happy Birthday Captain @M_Raj03 On this Birthday, I don’t know what gift I can give you but this promise that I shall give it all I have to make sure you will be proud of what you see of yourself on screen with #ShabaashMithu P.S- I’m all prepared to learn THE ‘cover drive’ pic.twitter.com/a8Ha6BMoFs— taapsee pannu (@taapsee) December 3, 2019

The much awaited film, Shabaash Mithu is being directed by Rahul Dholakia and has been written by Priya Aven.