Home The emerging crisis of obtaining helium in India
Array

The emerging crisis of obtaining helium in India 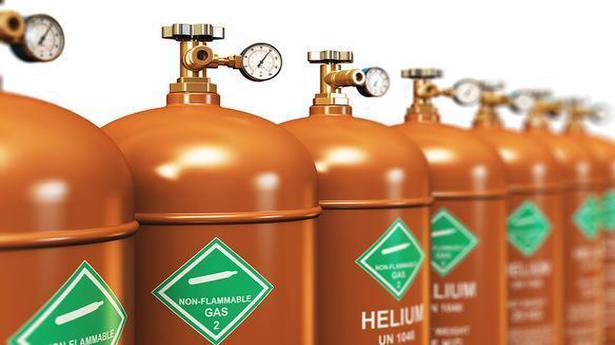 Every year, India imports helium worth ₹55,000 crore from the U.S.

Helium is colourless, odourless, tasteless, inert and a noble gas. Yet, it finds many applications, mainly in magnetic resonance imaging (MRI) scans, in rockets and in nuclear reactors. India imports helium for its needs, and with the U.S. appearing set to cut off exports of helium since 2021, Indian industry stands to lose out heavily. What is the solution? Can India become self-reliant towards its needs of helium gas?

In 1906 a young Englishman by the name of Moris Travers arrived in Bangalore, to take up the position of the Director of Indian Institute of Science. Travers extracted helium in small quantity by heating up monazite sand abundantly available in Kerala beach, in a pioneering effort.

Dutch physicist Kamerlingh Onnes liquefied Helium by cooling the gas to -270 degrees Celsius. It is known that Kamerlingh Onnes collected helium gas from the springs of Bath in Baden Baden, Germany for his liquefaction experiment.

Some scientists and geologists started looking for helium underground – they guessed it may be present there by analysing debris from volcanic eruptions. From the oil drilling operation in Dexter, Kansas, in the U.S., chemists Hamilton Cady and David McFarland discovered the presence of helium in natural gas. They further went on to discover that despite its overall rarity, helium was concentrated in large quantities under the American Great Plains.

The U.S. became the most important exporter of helium across the world. It was soon realised that U.S. was also the biggest store house of helium.

The U.S., now, is planning to switch off export of helium from 2021. Qatar is a possible exporter but acute political and diplomatic wrangles have made Qatar unreliable.

Every year, India imports helium worth Rs 55,000 crores from the U.S. to meet its needs.

Around 1956, as vice chancellor of Viswabharati University, Professor Satyendranath Bose once visited a village called Bakreswar (near Santiniketan) where he found water boiling naturally in a small tank. Satyen Bose’s antenna for unexplored and exciting science perked up! He was keen to analyse the natural gas that came out of the tank.

Shyamadas Chatterjee’s hunch was that the area called Rajmahal volcanic basin around Bakreswar and nearby Tantloi, now in Jharkhand, were floating on an ocean of helium.

He and his student Debasis Ghose started exploring Tantloi, which is populated by tribal people. The village is situated next to a stream, with naturally hot water with natural gas emanating from it. Preliminary investigations of the stream indicated there was around 1.6% of helium in the emanating gas, a little less than that in Bakreswar. This was around (1965-66). Professor Bose was in raptures.

Homi Sethna, then the Chairman of the Atomic Energy Commission arranged for the project to be part of the newly started Variable Energy Cyclotron Centre (VECC) project of Kolkata.

When I came over to Kolkata around 1984 to VECC from BARC, Bombay the helium project did not show much activity. The adventure of it all attracted me. I persuaded Dr. Divatia then the director of VECC to take a trip to Bakreswar along with Professor Chatterjee and Dr. Ghose.

In the evening Debasis Ghose produced a letter written by Prof. S. N. Bose to Nurul Hasan, Minister for Education on January 22, 1974, where Prof. Bose had, with his legendary foresight, argued with the minister for the production of helium on a semi-commercial scale. Prof. Bose unfortunately died on February 4, the same year. It should be mentioned that Bhabha Atomic Research Centre under the leadership of R. K. Garg, head of the Chemical and Engineering Division, in the 1970s made an effort to extract helium from monazite sand just as Travers did some years ago. Unfortunately, this project was doomed, and BARC did not push it any further.

When we took over the project in late 1980s we got very busy with other research and development projects. We all thought collection of helium on a large scale is a semi-commercial operation and nothing very much to do with research or development. Besides which, we just did not have the adequate man power.

So, this vast reservoir of helium in the Rajmahal volcanic belt remained untapped.

Extracting helium on a large scale did not seem to be of great importance to our scientific fraternity. After I stepped down from my official job in 2009, the possibility of helium extraction looked even more bleak. Then, I found a very understanding and enthusiastic person in the present chairman of Atomic Energy Commission, Dr. K. N. Vyas, who readily agreed to give the project a push with all the might of the Department of Atomic Energy (DAE).

Work has started in right earnest in collaboration with Atomic Mineral Division of DAE. Preliminary measurements and survey have already started.

Our target is to at least meet India’s requirement of helium. India consumes about 70 million cubic metres per year. But the reserve of helium by far exceeds this.

So, this effort although somewhat late is not too late yet!

India’s Rajmahal volcanic basin is the store house of helium trapped for billions years, since the very birth of our Earth from the Sun. At present, we are mapping the Rajmahal basin extensively for future exploration and harnessing of helium.

In conclusion, helium is not just for ballons but it is the key ingredient for India’s high technology and the most sophisticated medical diagnosis.