Home The hum of the hummingbird
Array

The hum of the hummingbird 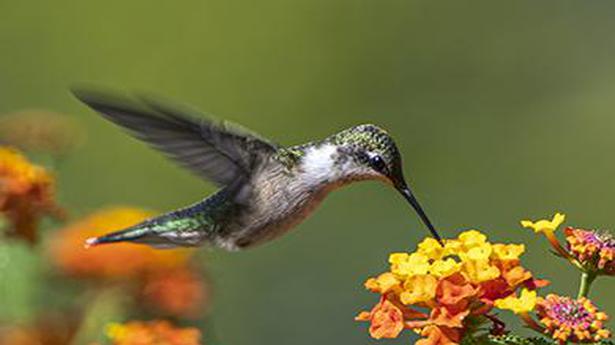 Why are hummingbirds called so? Do they hum?

The hummingbird gets its name from the sound it makes when it hovers in front of flowers to feed. The humming sound is generated by the bird’s wings. A new study (published in eLife) noted that the wings beat rapidly at 40 beats per second. The hum originated from the pressure difference between the topside and underside of the wings. Unlike other species of birds, the hummingbird’s wing was found to generate a strong upward aerodynamic force during both the upward and downward wing stroke. The researchers explained that most birds are relatively quiet because they generate most of the lift only once during the wingbeat at the downstroke. Hummingbirds and insects are noisier because they do so twice per wingbeat.

Using high-speed cameras and over 2,000 microphones, the team from the Netherlands, studied the hummingbirds drinking sugar water from a fake flower in a special chamber. They precisely recorded each wing-beat while the bird hovered in front of the flower and found that the wings generated sounds in a fashion similar to how insects do.

Understanding the hum of the hummingbirds may also help engineer new devices and also improve aircraft and drone rotors.