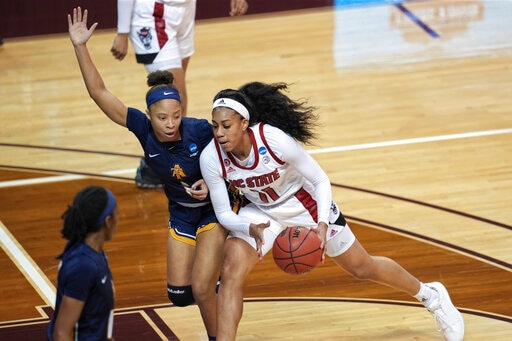 SAN ANTONIO: South Carolina coach Dawn Staley got her 500th career victory when Aliyah Boston and the top-seeded Gamecocks beat Mercer 79-53 on Sunday in the first round of the NCAA Tournament.

Boston had 20 points and 18 rebounds for South Carolina (23-4), which grabbed the lead for good when it closed the first half with a 16-5 run. Victaria Saxton also scored 20 points in the Hemisfair Region game at the Alamodome.

The Gamecocks were national champs in 2017, when the Final Four was last played in Texas. They finished 32-1 last season, spent the final 10 weeks at No. 1 and Staley was the AP coach of the year, but didnt get a chance to win another title because the NCAA Tournament was canceled because of the pandemic.

The Gamecocks will the Oregon State-Florida State winner in the second round.

The Yellow Jackets (16-8) will face the West Virginia-Lehigh winner.

Avery Brittingham had 16 points with 13 rebounds for the Ladyjacks (24-3).

N.C. State (21-2) was making its fourth straight tournament appearance and 26th overall, but earned a No. 1 seed for the first time. N.C. State will face the South Florida-Washington State winner.

All-American NaLyssa Smith added 18 points on 8-of-9 shooting and had 10 rebounds for the Bears (26-2). They will face Virginia Tech on Tuesday.

AUSTIN, Texas: Rennia Davis had 24 points and 14 rebounds and No. 3 seed Tennessee used a dominant second half to beat 14th-seeded Middle Tennessee.

Tennessee will face Michigan in the second round.

Big Ten player of the year Naz Hillmon finished with 14 points and 13 rebounds for the Wolverines (15-5).

Blair Green added 10 points for the Wildcats (18-8). They will Iowa in the second round.