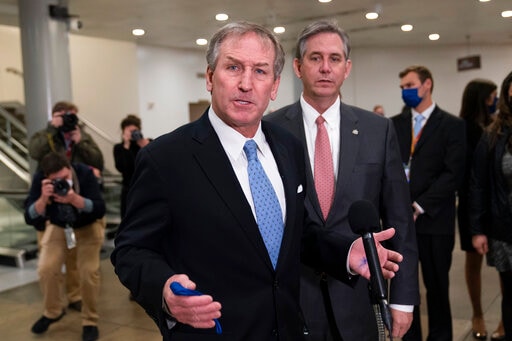 The failure to convict Donald Trump will live as a vote of infamy in the history of the United States Senate,” said Senate Majority Leader Chuck Schumer, a New York Democrat.

Even after failing to secure a second term, much of the Republican base remains fiercely loyal to Trump. And many Republican senators are leery of crossing the former president, who is known for seeking retribution.

Despite voting to acquit, Senate Minority Leader Mitch McConnell said there is no doubt that Trump is practically and morally responsible for provoking the events of the day. But ultimately he argued that it’s not constitutional to convict a former president who is now a private citizen.

Highlights from the concluding day of the trial:

Democrats said during closing arguments that Trump’s Jan. 6 speech did not alone incite his supporters to storm the Capitol. The speech, they argued, was the culmination of a monthslong campaign by Trump that primed his supporters for violence to further the big lie that the 2020 election was stolen.

This conduct took time and it culminated in Donald Trump sending a save the date, said Rep. Madeleine Dean of Pennsylvania, one of the House impeachment managers.

The evidence was clear to those who looked, they said.

Months before the election, Trump repeated ad nauseam a false claim that he could only lose through widespread voter fraud. He refused to commit to a peaceful transfer of power. And in an early morning speech after Election Day, he claimed to be winning.

In the weeks after, Trump and his allies presented a litany of conspiracy theories and evidence-free claims that the election was stolen.

But there was no widespread fraud, as has been confirmed by election officials across the country and then-Attorney General William Barr. Dozens of legal challenges to the election put forth by Trump and his allies were dismissed, including by the Supreme Court.

As Inauguration Day approached, Trump’s campaign played a hand in planning the stop the steal rally preceding the attack. Trump himself invited his supporters to attend. Be there, will be wild! he tweeted.

It told his base exactly when, where and who to fight, Dean said. They did this for Donald Trump, at his direction. At his command.

Trump’s attorneys blasted the impeachment as a complete charade foisted on the country by an opposition party obsessed with impeaching Mr. Trump from the very beginning of his term.

He said Trump was a victim, not the instigator. And the violence was not the product of a monthslong campaign to overturn the election. It was rooted, he said, in Democrats’ unwillingness to condemn violent riots last summer, which sometimes sprang out of racial justice protests.

As a nation, we must ask ourselves: How did we arrive at this place where rioting and pillaging would become common place?” said van der Veen. “It was month after month of political leaders and media personalities, bloodthirsty for ratings, glorifying civil unrest and condemning the reasonable law enforcement measures that are required to quell violent mobs.

As for the speech, van der Veen said Trump was merely exercising his First Amendment rights the day he told his voters march to the Capitol and fight like hell.

And if Trump had truly led a monthslong campaign to violently overturn an election, as Democrats asserted, then why did they not fortify the Capitol’s weak security on the day of the riot, he asked.

The day was expected to proceed quickly to a final vote. But late Friday, a statement from a Republican congresswoman scrambled proceedings and sent the Senate into recess.

Rep. Jamie Herrera Beutler of Washington state detailed a conversation she had with House Minority Leader Kevin McCarthy following the Jan 6. attack that revealed Trump was uninterested in quelling the mob as it rampaged thorough the Capitol.

Herrera Beutler said McCarthy told her that he spoke with Trump by phone during the attack, urgently requesting that Trump call off his supporters.

Initially, Trump denied they were his supporters, instead blaming left wing groups. “Kevin, theyre not my people, Trump told McCarthy, she said.

McCarthy responded, Yes they are, they just came through my windows and my staff is running for cover. Yeah, theyre your people. Call them off, Herrera Beutler said.

Trump shot back: Well, I guess these people are just more angry about the election and upset than you are.

The congresswoman had previously told a newspaper in her district, the Longview Daily News, about the phone call. But it didnt draw widespread attention until she released a statement about it late Friday in the wake of a CNN report.

Senators were clearly taken aback by the development and considered allowing witnesses, a step they had hoped to avoid because it could delay the trial.

Tempers flared and the Senate went into recess.

At one point, Sen. Ron Johnson, a Wisconsin Republican, turned to Utah Sen. Mitt Romney and could be heard saying blame you in a raised voice. Romney was one of the few Republicans who supported the impeachment effort. Romney later joked they were arguing about boxers versus briefs.

Proceedings eventually resumed and witnesses were not allowed. Herrera Beutler’s statement was entered into the trial record.

His voice repeatedly rose as he jabbed the Senate lectern with his finger, excoriating Democrats, who wanted to subpoena Herrera Beutler.

He argued that if the congresswoman were subpoenaed he should be able to slap subpoenas on a good number of people, too.

These depositions should be done, in person in my office in Phil-eee-delphia, he said, drawing out his pronunciation of Philadelphia, which drew hearty laughter from senators.

I dont know why you are laughing, van der Veer said with scorn. I havent laughed at any of you and theres nothing laughable here.

Sen. Patrick Leahy, the Democratic Vermont presiding over the trial, eventually cut in to admonish everyone.

I would remind everybody, Leahy said. All parties in this chamber must refrain from using language that is not conducive to civil discourse.