Home India Two, including minor, held for death of girls in Unnao
India

Two, including minor, held for death of girls in Unnao 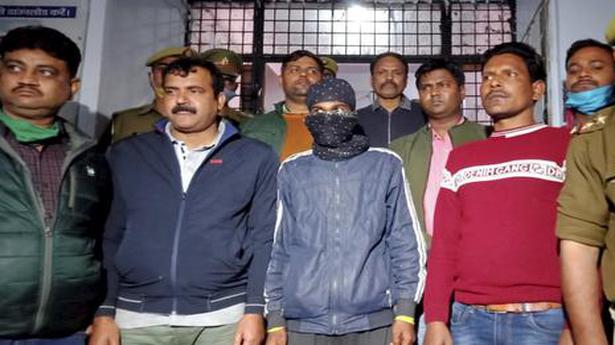 According to police, the main accused, Vinay, confessed to giving water mixed with insecticide to one of the girls after she continuously refused to give him her phone number.

The Uttar Pradesh Police on Friday arrested two youths, one of whom is a minor, from a neighbouring village for allegedly poisoning three minor Dalit girls in Asoha block of Unnao on Wednesday. Two of the girls died as a result; the third is under treatment in hospital.

The two victims were laid to rest on Friday amid a large police cover.

According to Inspector General (Lucknow range) Laxmi Singh, the main accused, Vinay, confessed to giving water mixed with insecticide to one of the girls after she continuously refused to give him her phone number. Ms. Singh added that according to the accused, the other two girls, all relatives, snatched the bottle and drank from it, despite his attempts to stop them. Vinay was helped by the minor, the official said.

The Inspector General said Vinay had come to know the girls during the lockdown as their fields were adjacent to each other. Over time, he began talking to the girls and developed a one-sided love for one of the girls, she said. She added that the investigation was still on and that Vinay’s confession was being verified.

The three girls were found in unconscious state, with froth in their mouths, in their family’s fields where they had gone to collect fodder.

The mother of one of the girls who died has alleged that the girls were sexually assaulted. The FIR, however, does not include the allegation and the police said that the post-mortem report found no injury marks on the victims.

Speaking after the funeral, the mother said she had found the body of her 16-year-old daughter with her hands and feet tied. “I untied the dupattas myself,” she said, breaking into tears. When a plainclothes woman constable comforted her, she said “You are my [daughter’s name] now.”

The brother of the 17-year-old survivor said she had never spoken of Vinay and did not have a phone of her own. “We are not fully satisfied. We still want an investigation by the Central Bureau of Investigation,” he said.

His sister, he said, had stopped attending school since the lockdown and was helping out with the family’s fields and cattle. The day of the incident had been like any other, he said.

“There was no fight, no enmity, no suspects in our mind. I just got a call while I was at work in Lucknow that this had happened. It didn’t happen, it was done by someone,” he said, demanding the strictest punishment for the accused.