What it takes for the conservation of whale sharks 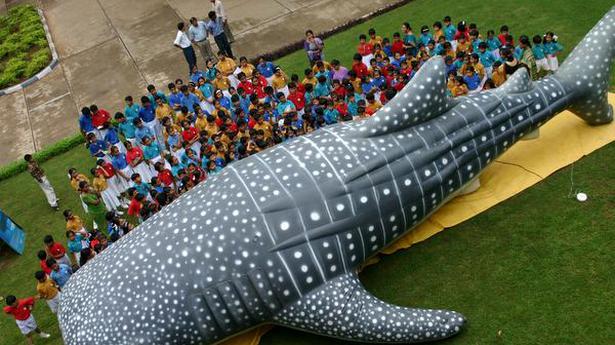 A study reveals the global population of sharks and rays have crashed by over 70% in the past five decades. But a few conservation initiatives in India show that well-crafted policies and awareness programmes can make a difference

Two decades ago, the coastal communities of Gujarat knew the ‘barrel,’ but not the whale shark. It was a commonly used name for the fish, not because of its size but because harpoons and barrels were used while hunting it. But today, they are referred to as vhali which means “dear one” in Gujarati. The change in perception is due to the conservation efforts of Wildlife Trust of India.

A recent study published in Nature, one of the world’s leading science journals, states that the global population of sharks and rays have crashed by over 70% in the past five decades. According to a report by the Central Marine Fisheries Research Institute, India is now the second largest shark fishing nation in the world, following Indonesia. This makes present-day, grassroots conservation efforts — by NGOs and State Forest Departments alike — all the more worthy of the spotlight.

It was in 2001 that, in a conservation attempt, whale sharks were included in Schedule I of the Wildlife (Protection) Act of India, 1972, rendering the capture and killing of the fish a cognisable offence. It was the first-ever species to be protected under this Act, after which the Ganges shark (Glyphis gangeticus) and speartooth shark (Glyphis glyphis) were added to it.

Sajan John, head of marine projects at Wildlife Trust of India, adds, “However, enforcing the fishing regulations for these sharks was not straightforward, as whale sharks were usually hauled in as bycatch when fishermen were targeting economically benefiting species. The meat of whale sharks is not very edible, it is the liver that is the most important for commercial trade, while oil from the fish is used for water-proofing boats.”

Despite the protection, whale shark landings were common on India’s West coast, especially in Gujarat.

This is when Wildlife Trust of India, decided to launch awareness and conservation programmes in the State to educate the fishermen about the species. “The decision of protecting the species was taken at an apex level but the information never trickled down to the fishermen. That is why we launched our Whale Shark Conservation Programme in Junagadh in 2004 and thereafter spread to Gir Somnath, Porbandar and Dwarka,” explains Sajan.

Workshops were conducted in villages and street plays were written and enacted to convey the consequences of hunting whale sharks. “We also roped in leaders from local communities to head our campaigns so that we did not look like outsiders calling them out for their practices,” adds Sajan.

Due to the consistent efforts of WTI, whale shark landings in Gujarat reduced and fishermen started releasing the fish during accidental encounters. But, the sharks that were saved in Gujarat were hunted down South on the coasts of Maharashtra, Kerala and Lakshadweep. “Once we realised this, we launched awareness campaigns in Kerala and Lakshadweep. Like Gujarat, we have street plays in coastal villages and have been part of carnivals to raise awareness. It is due to these efforts that the last whale shark landing from Gujarat was reported in 2005 and the incidents have reduced drastically in Kerala and Lakshadweep. Since 2007, the fishermen in Gujarat have reported spotting of over 50 whale pups. We are now geo-tagging these fishes to know their whereabouts,” he adds.

Meanwhile, on the East coast, the Forest Department of Andhra Pradesh along with The East Godavari River Estuarine Ecosystem (EGREE) has been conducting awareness programmes and workshops to educate fishing communities since 2013.

“In 2015, a survey was conducted in almost 500 fishing villages and hamlets across the State about whale shark sightings. In the process, over 650 fishermen were interviewed of which 90% knew about the whale shark, 50% had seen the fish and over 11% had seen a pup,” says C Selvam, Deputy Conservator of Forests (WL), Eluru.

Kakinada, Visakhapatnam, Machilipatnam and Nizampatnam are major shark landing areas in the State.

Irrespective of their size or habitat, humans have found a way to hunt most of the sharks and use every part of them.

The skin is used for leather which is made into boots and bags, and liver for oil. The fins were earlier harvested for shark fin soup, a sought-after delicacy in Southeast Asia and China. However, exporting shark fins was banned in India in 2015. It was easier raising awareness about whale sharks as the fish is protected under the Wildlife (Protection) Act but this could not be done for others.

Adding to this Sajan says, “The basic question that fishermen ask is whether it is illegal to kill the fish and when the answer is no, we have lost the battle there. We need to have more species under the Act so that we can save them from extinction.”